Ashley Bidne of Emmons and Garrett Waller of Northwood were married at 4:30 p.m. July 12, 2014, at Wedgewood Cove in Albert Lea in a double ring ceremony. The Rev. Perry Aalgaard, friend of the bride, officiated. A reception and dance followed the ceremony at Wedgewood Cove. 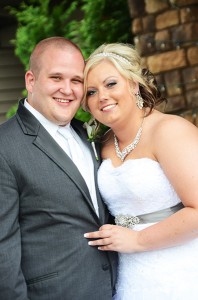 Ashley is the daughter of Jay and Wendy Bidne of Emmons and is the granddaughter of Terry and Marlene Brink of Albert Lea and Larry and Donna Bidne of Lake Mills.

The bride is a 2009 Lake Mills High School graduated and attended NIACC. She is an assistant general manager at Holiday Inn Express in Albert Lea.

The groom is a 2009 Northwood-Kensett High School graduate and attended NIACC. He is a technician at Verizon Wireless in Mason City.

The maid of honor was Lauren Severson, cousin of the groom, of Northwood.

Personal attendant was Kirsty Riggert, friend of the couple, of Wesley, Iowa.

Host and hostess was Scott and Tammy Severson.

Cake cutters were Tammy Fredrickson and Joni Bidne, aunts of the bride.

Guestbook attendants were Alan and Rose Frederichs, special friends of the groom.

A wedding trip was taken to St. Croix, Virgin Islands, and the couple will reside in Northwood.