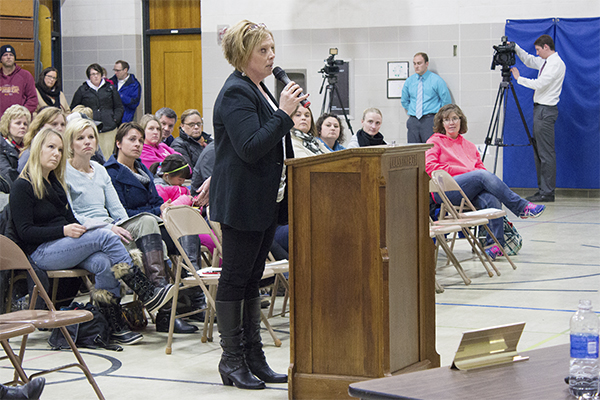 Jo Ann Erickson, teacher with Albert Lea Area Schools, talks to the board during the open microphone time at the school board meeting on Monday. Discussion of the proposed calendar — and ultimtely the vote — were postponed for two weeks. — Hannah Dillon/Albert Lea Tribune

A speech by a school board member before a crowd of 100 parents, students, staff and district residents along with comments from an open microphone discussion prompted the board to hold off a vote on whether to alter the school calendar.

The proposed calendar will be further discussed and possibly voted upon at the Dec. 1 school board meeting. Any final decision rests with the state Department of Education.

Jill Marin, a school board member who was re-elected to the board earlier this month, gave a lengthy and impassioned speech about why she doesn’t support the proposed calendar, which calls for starting classes in August after the Freeborn County Fair and with longer breaks primarily for remedial education. The board and administration proposed the idea while looking at ways to improve test scores for students in poverty. 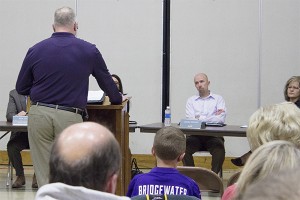 Tom Sorenson talks to the Albert Lea school board during the open microphone time at the school board meeting on Monday. — Hannah Dillon/Albert Lea Tribune

“I do not believe this is best for kids,” she said.

While Marin said she appreciated many of the positives of the proposed calendar, she doesn’t believe the calendar is right for Albert Lea right now.

Marin said the proposed calendar will make it harder on families with students in the free or reduced lunch program.

She said these families are struggling and many of these students get jobs in the summer to help pay for various things such as college. Jobs might not be available for just two weeks in October and March.

Marin also said the community is working toward reducing stigma and stereotypes of ethnic groups and separating students into two categories might exacerbate the stigma of receiving free or reduced lunches.

Marin’s comments got a standing ovation from the crowd. Julie Johnson, another school board member, voiced her opinions and why she doesn’t support the proposed calendar, and also received applause.

School board member Bill Leland and school board chairwoman Linda Laurie both voiced their support of the proposed calendar in their comments. School board member Jeshua Erickson didn’t offer a black-and-white yes or no, but instead talked about the pros and cons he saw.

Recently re-elected school board member Mark Ciota didn’t have any opening comments, as he wanted to hear what the other board members would say after some discussion. He said Marin’s speech brought up points he hadn’t considered before.

Besides Marin’s speech, about 30 minutes of open microphone before the board’s discussion was also a factor in postponing the discussion and vote on the proposed calendar.

Tom Sorenson, who has an eighth-grader in the district and a daughter who graduated in 2006, brought up the REACH and AVID programs being implemented in Austin.

AVID (Advancement Via Individual Determination) is a course aimed at middle-level students to help challenge them. REACH (Rigorous, Enriched, Accelerated Curriculum) is a program that helps connect students between the classroom and counseling office.

Julie Sorenson finished her husband Tom’s letter as he ran out of time. She said having one school as a pilot program for two years would give a good chunk of data to analyze before making the whole district switch. 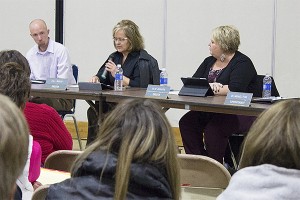 School board member Jill Marin gave a lengthy speech at the school board meeting on Monday outlining why she doesn’t support the proposed calendar. Marin got a standing ovation from the crowd. — Hannah Dillon/Albert Lea Tribune

Jo Ann Erickson, who has an eighth-grade daughter in the schools and is a social studies teacher with Albert Lea Area Schools, said she spoke in front of the board as a way to teach her daughter about democracy.

She said limiting voices to two minutes is “as laughable as forums where people didn’t get to voice their opinions.”

She said the proposed calendar may push teachers to leave so they can be on the same schedule as their children.

Erickson is one of the first teachers to come forward at one of the meetings and voice her disapproval of the proposed calendar.

Many other community members spoke, many urging the school board to vote no.

One community member came forward and said he supported the proposed calendar because it could help his son.

His son requires extra reading help, but he said his son is usually worn out after school. The community member said his son would benefit from the remediation.

Another community member came forward and said her son also isn’t at reading level, but she doesn’t believe the calendar will help.

After the school board members and community members had a chance to speak, Superintendent Mike Funk spoke to the district residents in attendance.

Funk said he’s passionate for every student in the district and when kids aren’t successful, other options need to be looked at.

The community survey, which cost $16,000 and found 62 percent in favor of the calendar, looked at the entire community because the board works for the entire community, Funk said. He accepted the belief that the survey was biased but also said a majority of people surveyed — 57 percent — were accepting of the proposed calendar idea before being read any statements.

While he applauded the district residents who showed up, Funk said that their numbers were not an accurate sampling of the community.

The audience reacted, many members standing and trying to speak. Laurie tapped the gavel and called the meeting to order once more and some of the audience members left.

After more discussion among school board members, Funk said he is a “firm believer of not wanting to rush into failure” and suggested postponing the vote to give the board more opportunities to reflect.

Ciota said he was “amazed” Funk suggested postponing the vote, as he noted Funk is a proponent of the proposed calendar.

Jeshua Erickson, Marin and Johnson also said they would be OK with postponing the vote. Laurie said she wanted to vote and not postpone anything.

Leland made a motion to postpone the discussion until Dec. 1 and Ciota seconded.

The board discussed about what to do during the two weeks until the next meeting. Many of the board members wanted to get in contact with teachers to see their thoughts, and an anonymous online survey was the consensus.

Marin said her main concern was anonymity, but Erickson said the district doesn’t have any means to track which teacher goes on which survey.

• Listened to the superintendent’s report. Funk announced that beginning in January, the school board meetings will move to a room with audio and visual recording technology so board meetings can be broadcasted.

Funk also wanted to announce that though the National Guard is sending soldiers to Africa, he will not be deployed. Lastly, Funk acknowledged the Albert Lea girls’ soccer and swimming teams for their recent accomplishments.

• Approved a bid from Schwab LLC for a $2,231,000 air conditioning upgrade to Lakeview Elementary School. Deputy Superintendent Lori Volz said the bid is well within the school’s budget.

• Approved a new way to advertise for bids. Bids will now be published in the newspaper with a short message directing interested bidders to the school’s website for more info.