Corey Goodnature to be honored by T-wolves

In recognition of his service in the U.S. Army, fallen soldier Corey Goodnature of Clarks Grove will be honored by the Minnesota Timberwolves. 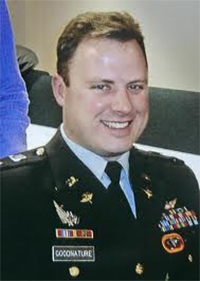 As part of the Wolves’ Military Night against the New York Knicks, Goodnature and his family will be honored on the court as a Gold Star Family before the opening tipoff at 7 p.m Wednesday at Target Center.

“It’s a great way to honor Corey 10 years after the accident,” said Corey’s father, Don Goodnature, of Clarks Grove. “It sounds like a great night.”

Corey will be represented by his parents Don and Deb Goodnature; his sister, Amy Purdy; her husband, Ben Purdy; and their two boys, Kane and Landon of Alden, Don said.

The group was invited for the Wolves’ shoot-around at 5:30 p.m., and after the Goodnature family is recognized, it will watch the game from a suite.

Don said he enjoys following the Timberwolves, but the main winter family sport is wrestling. Corey was a three-sport athlete and former grappler at Albert Lea High School, and his uncle, Larry Goodnature is the Tigers’ wrestling head coach.

As a pilot for the 160th Special Operations Aviation Regiment, Goodnature was killed in action on a mission to rescue four Navy SEALS in Afghanistan in 2005.

According to a press release, the Timberwolves donated 5,000 game tickets to troops from Minnesota.