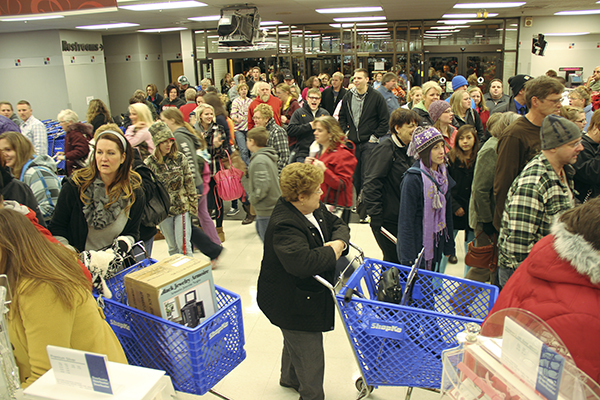 With the holiday shopping season kicking off tonight across the country, local retailers and business leaders are encouraging people to stay in town to shop for this year’s gifts.

Albert Lea-Freeborn County Chamber of Commerce Executive Director Randy Kehr said business owners are optimistic in their sales the rest of the year and are gearing up for customers.

“Economically, the community is in good shape,” Kehr said. “I think people have some more spendable income even though there’s some uncertainty with health care and other issues.” 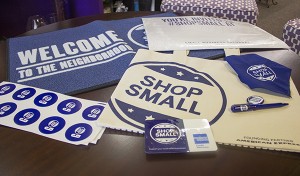 Downtown Albert Lea business owners will be taking part in Small Business Saturday and handing out several free items, including stickers, bags and pens to customers, along with offering refreshments and sales. – Sarah Stultz/Albert Lea Tribune

Kehr said local businesses are the places the community turns to for support for fundraisers and other youth activities.

“Your friends and your neighbors work at these locations,” he said. “You’re not just supporting local businesses, you’re supporting the local community.”

He said sales show that Albert Lea is a regional center that draws people in to shop from northern Iowa and to the west of Albert Lea.

Of those gross sales, $190 million of those sales in Freeborn County were taxable, while $48 million were in Dodge County, $72 million in Fillmore County, $200 million in Mower County, and $331 million in Steele County. 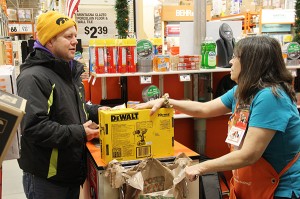 Matt Otten of Mason City checks out with the help of cashier Beth Cole at the Albert Lea Home Depot the morning of Black Friday in 2013. – Sarah Stultz/Albert Lea Tribune

The report states Freeborn County has a higher pull factor — or ability to draw people into town — than Dodge, Fillmore and Mower counties, but lower than Steele and Olmsted counties.

A comparable monthly breakdown of sales was not available.

Kehr said he thinks people can find what they’re looking for in Freeborn County.

“If you don’t find it here, someone can get it for you,” he said. “I think overall the community feels that way.”

Paula Hertling, who owns Leuthold’s with her husband, Bill, in Northbridge Mall, said their business will be closed Thanksgiving Day to allow time to be with family but will open at 8 a.m. Friday. They will offer 40 percent off of any one item.

She said as a specialty store, Leuthold’s is in a different position going into Black Friday. They focus on customer service and helping people find special gifts.

She stressed the importance of supporting area retailers.

“It’s all about being special and shopping local,” she said. “Without the small retailers and the specialty stores, everybody would be dressing and looking the same.”

Downtown Albert Lea businesses are gearing up for Small Business Saturday, an initiative created by American Express in 2010 to encourage people to shop at small businesses the Saturday after Thanksgiving.

Tami Staker, co-owner of Celebrations Party & Gifts, 122 S. Broadway, said she signed up the downtown for the initiative and by doing so received canvas bags, buttons, pens and stickers that say “Shop Small” that she will distribute to other businesses to hand out that day to customers.

Most businesses will open at 9:30 a.m. that day and stay open until 4 p.m., with sales, refreshments and other festivities.

“It’s so important to come downtown,” Staker said. “It’s the heart of the city.”

She said she is looking forward to the Christmas holiday season, particularly since her business started selling children’s toys in the last year. She noted the business is up 18 percent in revenue this year from making that change.

She said people are finding a renewed interest in shopping downtown as well.

Holiday music will begin playing downtown on Friday and will run throughout the season, mostly on weekends, Staker said.

$12.3 billion: sales increase nationwide at brick-and-mortar stores on Thanksgiving and Black Friday in 2013

2.8: percent increase in foot traffic nationwide for the combined Thanksgiving and Black Friday period in 2013

9.3: percentage of growth in 2013 in the U.S. for non-store holiday sales, which is an indicator of online and e-commerce sales

— Information from ShopperTrak and the National Retail Federation