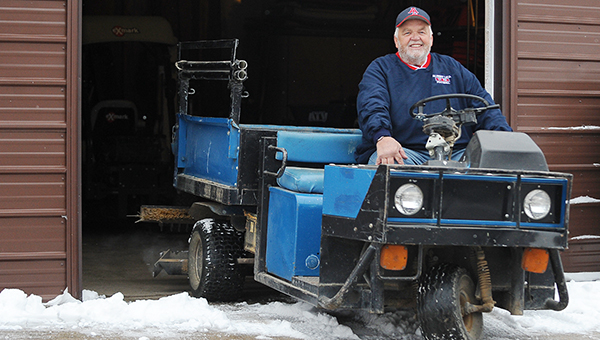 He’s ready for some football

From March of 1980 until his retirement on Oct. 31, Hamberg was the grounds manager at Albert Lea High School tasked with keeping Jim Gustafson Field looking sharp.

“You try as hard as you can to make it look really nice. We take pride in in it, but we want the kids to be proud of it too,” Hamberg said. “We measure several times and double-check our measurements because the last thing you want is to have a measurement for a first down and something is out of whack.”

The first job Hamberg had for Albert Lea Area Schools was a custodial position he accepted in July of 1979. When the job at the football field opened up, he said he didn’t apply because he was a new employee. However, the school district offered him the job because no one else was interested, he said.

“It’s one of a kind, and I’m glad they didn’t want it because it was a blessing for me.” 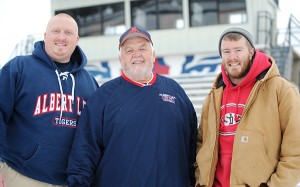 Since 1980, the field has changed. One of the biggest improvements was the re-crowning of the field to reduce the height of the crown for soccer and the installation of a sprinkler system in 2006.

Before that, Hamberg said he used three to four rain trains — the traveling sprinklers that follow the hose — to keep the ground from drying out. Hamberg’s son, Adam, said he remembered helping his dad move hoses around the field.

“We’d get out of church around 11:30 a.m., pull up in the station wagon and shut off the sprinklers that he started sometime before church,” he said. “Then we’d get out and move them to different corners of the field and turn them on again. He was always doing something. He was always working, always providing, but he had the time for family, too.”

Adam was a waterboy and ballboy for the Albert Lea football team, and he went on to play football and baseball for the Tigers before he graduated in 2001.

Aside from watching a comeback win over Austin by the Albert Lea football team in the mid-’90s under head coach Chris Chalmers, Hamberg’s favorite moments on the job involved his family.

“I’ve had several good memories,” Hamberg said. “One of them was back when Adam played football and baseball. He was Homecoming King one year, so that was a fun year. My daughter (Emily Slack) danced on the dance line and so did my niece (Breanna Shea).”

Adam said he enjoyed playing on the field his dad cared for.

“Playing on dad’s turf, it was the best grass to play on in the entire Big Nine,” Adam said. “It’d be a shame if it ever went to artificial turf.”

After the dance team finished its routine Oct. 3 during halftime of the Tigers’ Homecoming football game against Faribault, the press box lost power along with some lighting around the complex, including the scoreboard. While Hamberg was troubleshooting, he discovered a faulty wire, but he had a contingency plan that was set into motion before the issue was resolved.

“We anticipate a lot in this job,” Hamberg said. “I usually have the (portable) scoreboard plugged in for games, just in case.”

Along with painting the lines for each football and soccer game, Hamberg and his staff painted the team logo at midfield for Homecoming and touched it up for the rest of the season.

“We put a (plastic) template down, and then we take spray cans to dot it in,” he said. “It takes us the better part of a day, and you’re hoping for a still day so the wind doesn’t get to the plastic.”

In addition to caring for Jim Gustafson Field, Hamberg was also in charge of maintaining the Hammer Complex, which includes the track, pits for field events, the softball field and the infield at Hayek Park.

Taking over the grounds manager position was Spencer Dahl, a 2007 graduate of Albert Lea High School who worked for Hamberg the last 11 summers. He graduated from St. Cloud State University planning to be a physical education teacher. After testing the waters in the teaching job market, Dahl said he decided to take over for Hamberg.

“From the first year I worked here, I really loved the job,” said Dahl. “It’s always been about pride and making everything look the absolute best it could. I’ve learned from the best, and I just want to keep it going.”