The viewing will be from 4 to 6 p.m. today at Bride Colonial Chapel, 110 Spring St. in Manly, Iowa, with a rosary service at 5:30 p.m. Funeral services will be at 10:30 a.m. Thursday at Sacred Heart Catholic Church in Manly with the Rev. Rodney Allers officiating. Interment will be at Bohemian Cemetery in Plymouth. 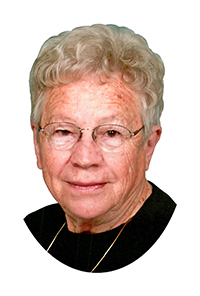 Irene Ann Schultz Heiny was born July 23, 1926, in Albert Lea. She was the daughter of Frank Schultz and Cecilia M. Schultz. She attended St. Theodore Catholic grade school and Albert Lea High School. She married William Wayne Heiny on Feb. 1, 1949. They made their home on the family farm near Plymouth. Irene was fiercely independent. She remained living on the family farm, by herself, following her husband’s death in October 1997.

She was active in St. Michael’s Catholic Church and St. Michael’s Guild in Plymouth until the church closed. She was a member of the American Legion Auxiliary.

She enjoyed baking, gambling, fishing, camping, jigsaw puzzles and working outdoors.  She very much enjoyed traveling before macular degeneration affected her sight. She traveled to China, England, the Emerald Isle and the World Fairs. She enjoyed frequent bus trips and the birthday club with “the girls.”  She was an early riser who enjoyed cooking, collecting and reading cookbooks, of which she had hundreds. She was very keen to always pay her own way. Irene was a very caring and loving person who was loved by many. Family meant a great deal to her and she was very proud of her children, grandchildren and great-grandchildren.

She worked at Wilson & Co. in Albert Lea, Mason City Newman High School, Libbey-Owens Ford in Mason City, Winnebago in Forest City and retired from Rockwell Collins/Boeing in Mason City. She enjoyed bowling and was a member of the Roadrunners girl’s group in Albert Lea years ago.

Online condolences for the family may be expressed at www.colonialchapels.com. Memorials may be directed to the family.