Funeral services for Marion McDaniel will be at 10:30 a.m. Monday at Grace Lutheran Church. The Rev. Janet White will officiate. Interment will be at Hillcrest Cemetery. Visitation will be one hour prior to the service at the church. Online condolences are welcome at www.bayviewfuneral.com. 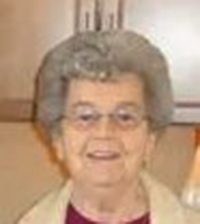 Marion Lorraine McDaniel was born Sept. 26, 1923, in Manchester, the daughter of Andrew and Minnie Knudson. She grew up and went to school in Manchester.

On Sept. 9, 1944, Marion was united in marriage to Glenn S. McDaniel at First Lutheran Church. They made their home in the Albert Lea area. Marion was a member of Grace Lutheran Church where she was active in a sewing circle and the Altar League. She volunteered at Thorne Crest Retirement Community. Marion enjoyed reading, baking, sewing and spending time with her grandchildren.

Marion was preceded in death by her parents; her husband, Glenn; daughter-in-law, Debra McDaniel; and brother-in-law, Andy Nelson.

In lieu of flowers memorials are preferred to the American Cancer Society or Grace Lutheran Church.