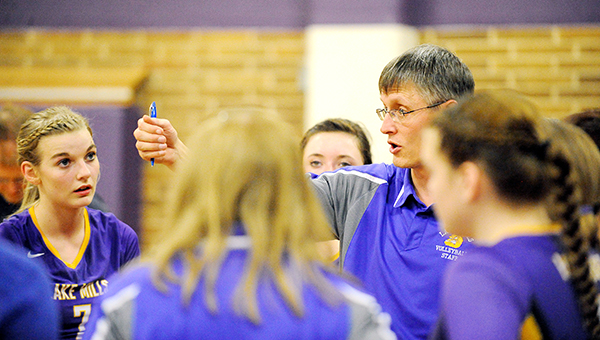 Lake Mills coach Jim Boehmer talks to his team during a timeout on Oct. 28 in the Class 2A Region 5 quarterfinals against West Fork. Lake Mills won the match 3-0. — Micah Bader/Albert Lea Tribune

LAKE MILLS — As part of a program that has finished in the top half of the North Iowa Conference for 25 straight years, this year’s Lake Mills volleyball team made its mark by winning a school-record 46 matches.

The majority of that success has been under the direction of Bulldogs coach Jim Boehmer, who completed his 23rd season and has an overall record of 681-166-29 with a 141-23 mark in the NIC.

Boehmer is the Tribune’s All-Area volleyball Coach of the Year. He was also Athletic Director of the Year for Iowa’s Northeast District. 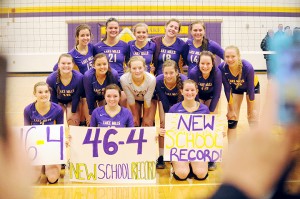 The Lake Mills volleyball team celebrates winning a school record 46 matches on Oct. 31 after a victory over Clarion-Goldfield-Dows in the Class 2A Region 5 semifinals. The team’s record at the time was 46-3, but the Bulldogs finished with a 46-4 record after a loss against Grundy Center in the regional semifinals. — Micah Bader/Albert Lea Tribune

Aside from leading the Bulldogs to the top of the conference, the team qualified for the regional finals — the final 16 teams in Class 2A — each year since 2008, which is also a school record.

This year, Lake Mills swept West Fork in the quarterfinals and Clarion-Goldfield in the semifinals before a 3-0 loss against Grundy Center, a team that swept Solon — the Class 3A state champion — during the regular season.

Lake Mills was led by junior setter Kelsea Heintzman, who led Class 2A and was second in Iowa with 1,165 assists, and Cede Byrnes, who led the area with 315 kills, was second with 387 digs.

The Bulldogs’ final record was 46-4 with the NIC regular-season and conference titles. In the last five seasons, Lake Mills has a combined record of 214-14.

Q: What makes this group stand out from the other teams you’ve coached in your 23rd season?

A: This is a tough question. I have had 23 years of leading this program, and that’s a lot of teams! I am not sure I can answer this as I work hard to build a team around our overall philosophy of team first and doing things the Bulldog way. I would say this group is as driven as past groups, but they are more introverted than any I have had. They are quiet and internalize so much of what I tell them. They may also be as hard on themselves as any group I have coached.

Q: In terms of total kills, Lake Mills had five of the area’s top eight players. How pleased were you with the balance and unselfishness the offense showed?

A: I was extremely pleased in our balance. We work hard to move the ball around, and that is a daily focus in practice. We get the ball to our right side more than most teams do. The girls would say I’m never pleased with anything, but I do like our balance. It says a lot about our program and how hard each kid works to contribute.

Q: What surprised you most about this group?

A: How close they became as a team and how much leadership our seniors displayed. I wasn’t sure where we would be as a team, and if having just three seniors was going to create a leadership void. But Sydney (Larson), Rachel (Segura), and Hannah (Holstad) stepped up. They were all in and demonstrated great maturity throughout the year. I think the growth they showed in leadership was as critical as any skill development we had as a team.

Q: How was the team able to play 50 matches this season after 41 last year?

A:   We went from seven North Iowa Conference matches to 10. Then the NIC tournament went from five maximum matches to six, and we only played four last year at the tournament. We also dropped a quad of three matches and replaced it with a tournament with six matches. Next year, we will drop back down to 39 regular-season matches as the conference will go to divisions, and we will no longer have a conference tournament.

Q: In spite of the long season, the team played with a lot of energy in the regional tournament. Did you see the long schedule as a positive thing?

A: I look at it like this: if you want to get better at doing something, you better practice doing it! I think you benefit from playing. If not, something is wrong. I love practice — the girls would tell you I love it too much.  But practice gets boring if you don’t break it up with some matches.

Q: What was your favorite moment of the season?

A: Winning the NIC regular season with the Forest City match being the critical match, and winning the NIC tournament in dramatic fashion. We played nine sets that night in Mason City, and for us to go through that and pull out the victory says a lot about the girls. Setting the school record at home in the regional semifinal was also very special.

Q: Where are some areas you think next year’s team can improve?

A: We have got to be faster, and that will happen if we handle the first ball better. That means we must improve passing the serve and digging defensively. If we get a better first ball, we can speed up our tempo, and then we can be even better. We must also do a better job of adjusting defensively during a match. This means we have to communicate better on the floor, and that is a weakness even some of our best players have.

Q: How did you feel the team lived up to expectations?

A: These girls reached all but one of their goals. I think they passed all expectations that most outside of our program had for us. The most important thing is that you work hard, and that you do it with passion. If you do that, you’re going to have good things happen. 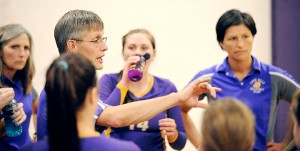 Lake Mills volleyball coach Jim Boehmer instructs his players during a timeout on Oct. 31 against Clarion-Goldfield-Dows. The Bulldogs won the match 3-0 by scores of 25-21, 25-23 and 25-15. Lake Mills swept its opponents in 37 of 50 matches. — Micah Bader/Albert Lea Tribune

Q: What is in the works to build on this year’s school record number of wins?

A: 46 will never happen again. It’s just not in the cards to get that many matches.

Q: How did you get started in coaching volleyball?

A: My sister played college volleyball at Waldorf College and the University of Northern Iowa, and I was a little gym rat following her around as she played. My parents took me to all her matches. Then I dated a volleyball player and later married her. My wife, Angie, loves the game, and when the opportunity opened up, she was wanting to coach. Because of her I got involved. We started having kids (three boys) so she decided to step away from the high school program. Make no mistake about it, she got me into this, so everyone can blame her and not me!

A: No. I am my own person. Good, bad, or whatever, I am who I am.  All I have tried to do is get better every day, every week, and every season. That is what I ask of my girls, so I better do the same. Each year they teach me something different, and I truly thank them for taking me along for the ride each season. My passion is something that gets me in trouble all too often, but it is that same passion that I coach with. The best compliment people can give me is when they say I have changed over the years. I think sometime they say it to see if they can get a rise out of me, but I take that as a great compliment. I sure hope I have changed.

Q: With only three seniors graduating this year, what’s your outlook on next season?

A:  Improve. I will keep it simple and let the girls set their own team goals. I will surely tell them what I think they need to do to reach those goals, but each year it is their team and their season. I think we have great potential to be one of the best teams in Iowa, once again. But it will take a lot of work and a lot of dedication.  I think we will have a chance to win all 39 regular season matches next year. Could we be 39-0 going into regionals? Yes. But, we also have about 13 matches against teams that could beat us. We want to be in a position to have another regional final appearance and see what happens from there.