Funeral services for Vernon Baer will be at 11 a.m. Thursday at First Lutheran Church, Albert Lea. The Rev. John Holt will officiate. Military honors will be accorded by local servicemen’s organizations, VFW and American Legion. Interment will be at Graceland Cemetery in Albert Lea. Visitation will be one hour prior to the services at the church. Online condolences are welcome at www.bayviewfuneral.com. 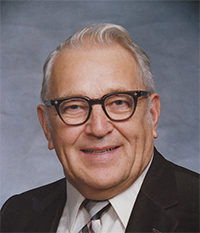 Vernon Leroy Baer was born March 4, 1920, on the family farm in Faribault County. He was the oldest child of six to Erick and Agnes (Lindeman) Baer.

He attended the Hintz country school near their farm and later graduated from Kiester High School in the class of 1938. After high school, Vernon farmed with his dad and two other area farmers.

Vernon met Fern Passer in 1936 on a rainy afternoon at the Freeborn County Fair. They were married on Sept. 26, 1941.

Only one month after their wedding, Vernon was inducted into the U.S. Army and went to basic training at Fort Bragg, N.C. One week into basic training, the Japanese attacked Pearl Harbor. When basic training was completed, Vernon was assigned to the 125th Field Artillery Battery of the 34th Infantry Division. Fern visited Vernon in New York City in March of 1942 before Vernon shipped out to Europe. He did not see her again until May of 1945.

After short stops in Ireland and England, his infantry shipped to northern Africa, where his division battled German forces under General Rommel. Here Vernon acknowledges a time when the hand of God protected him. His infantry’s next assignment was to the Appian Mountains of northern Italy. In the spring of 1945, Vernon was given the option to be discharged from the Army and he took it.

After returning home, he and Fern lived in Albert Lea and he began an apprenticeship with Sorenson Brothers Construction. Vernon was involved in many projects including an expansion of the Naeve Hospital. In 1961, Vernon accepted a job at Streater store fixtures and remained employed there for 24 years until he retired 1985.

Vernon was a master woodworker and enjoyed playing cards, golfing and spending time with friends. He and Fern loved to travel and visited many destinations in the U.S. and Europe. Vernon was always ready with a good joke.

Vernon is survived by brother Robert (LaVonne) Baer, sister VeeAnn Finnemore and many nieces and nephews.

Memorial contributions may be made to St. John’s or the Salvation Army.