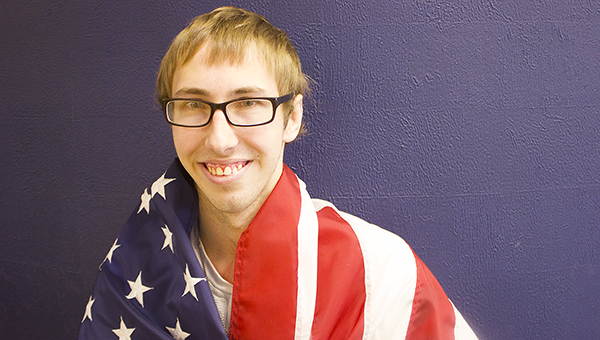 Spencer Krier’s interest in politics stands out during local election seasons. The young man has an enthusiasm for the process of democracy, and though he favors Republicans, he likes speaking with Democrats, too. – Tim Engstrom/Albert Lea Tribune

‘In love with this country’

Everybody who is engaged in politics in the Albert Lea area knows him.

“Spencer has always been one who grasped things,” said his father, Bob Krier.

By the way, Spencer has autism, but no one who met him today would guess it. He said that if you had met him 10 years ago it was a different story, where his autistic traits would be more noticeable. Nowadays, he seems quite mature for his age. He has a higher functioning form of autism called Asperger syndrome.

But the interest in the American political system remained the same then and now. He can name all the presidents in order, forward and backward. The capitals of all the states? No problem. He has been to 35 states and to 13 capitol buildings. He wants to visit more capitals and capitols.

His father described how it all started. When Spencer was in kindergarten his mother, Holly, wrote a letter to President George W. Bush to raise awareness for autism. Bush replied with a letter.

Then in 2004, during Bush’s re-election campaign and with passes from local lawyer Matt Benda, his father took him to see Bush get off Air Force One in Rochester and met the president as he came through the crowd.

“It was the spark he needed,” Bob said.

He has been hooked on politics since.

That year, he had a friendly rivalry with the late Glenville-Emmons Elementary School principal and teacher Sue Gillard, who favored Democratic candidate John Kerry. On the day after Election Day, Spencer strode into school happily and let Gillard know Bush won.

Spencer said his earliest political memory, however, stems from kindergarten, where he participated in two classes. Both were holding pretend elections. Pupils voted for Bush or Al Gore. Spencer voted for Bush in one class and Gore in the other.

Because of the child’s interest, Bob would take him to the voting booth to witness the process.

“I’ve always been in love with this country and wanted to experience our rights firsthand,” Spencer said.

He didn’t read the typical fare. He liked books about American presidents. They had a newspaper in the home, which allowed him to follow local politics, too.

The 2013 Glenville-Emmons graduate was active in his teenage years with 4-H, FFA, church, Boy Scouts, Glenville-Emmons High School Student Council, National Honor Society, choir and band. He got a letter from President Barack Obama when he achieved Eagle Scout status.

“It didn’t even cross my mind that it was even possible,” Spencer said. “We are a swing district, but we weren’t always. We were predominantly Republican.”

He said Brown was personable and grew up in a family of Republicans. He said being personable and approachable helps win District 27A, and a matchup between Brown and state Rep.-elect Peggy Bennett would be a close one.

He said he enjoys speaking with Democrats and has good rapport with Brown and folks like Miles Pechacek. Spencer even voted for Democratic state Sen. Dan Sparks in 2012.

Yes, this fall Spencer was at Republican headquarters getting the vote out for Bennett, wearing her shirts, posting signs, knocking on doors. He was pleased to attend the Republican convention for the 1st Congressional District at Southwest Middle in April because there were other College Republicans present.

“You don’t see that around here,” he said.

Apathy among young adults bothers him. He said no matter which party they lean toward, they should participate in democracy.

“We don’t have people dying for us to not vote,” he said.

He has made buttons that say “Spencer Krier in 2032,” which would be the first election for president where he would be eligible. He still has the letters from Bush and Obama.

Presently, he is getting his general education requirements out of the way at Riverland Community College. He works at the meat counter at Hy-Vee and is a prep cook at Applebee’s. He said he eventually wants to get a degree in political science from the University of South Dakota and find a role with public service, such as working at the Capitol complex in St. Paul.

Interesting fact: He has been deer hunting for eight years but didn’t get his first deer until two weeks ago.