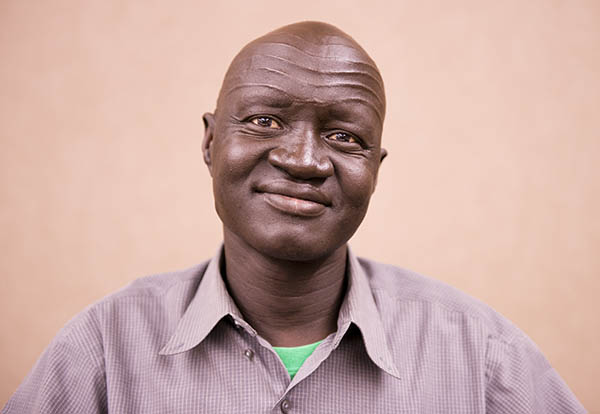 Simon Dup was the first South Sudanese refugee to move to Albert Lea. Dup moved to the area in 2003, and was a pastor, leading Sudanese worship services that rotate between different local churches like Zion Lutheran Church in Albert Lea. – Colleen Harrison/Albert Lea Tribune

The South Sudanese community from Albert Lea and across the country will honor one of its leaders on Saturday.

Simon Ter Dup, 47, died Dec. 19 after a more than yearlong battle with lymphoma.

Known for his religious convictions, Dup was a man of principles who loved his community and wanted to do what he could to better it, said Chang Ruach, a success coach with the Albert Lea school district who has known Dup for four or five years. Ruach said Dup was a good parent who taught his eight children to be responsible.

“Simon was really a good guy among all Sudanese,” said Dabang Gach, who first met Dup in a refugee camp in Ethiopia.

Dup was born in Longechuk County in southeast Sudan, but left Sudan as a young boy, living in Ethiopia while the people of his country were engaged in what he previously described as a war between Muslims in the north and Christians in the south.

He moved to Albert Lea in 2003 from Des Moines with his wife, Mary Puok, and five of their children and was ordained a minister on Oct. 18, 2009.

Wal Reat, pastor of Our Savior’s Lutheran Church in Faribault, described Dup as a spiritual leader. Though Dup’s congregations belonged to the Missouri Synod and Reat belongs to the Evangelical Lutheran Church in America, Reat said they shared their church work in Minnesota.

In an interview in July, Dup said he had returned to Sudan six times since he first left, the most recent time in 2013. He took donations of about $10,000 to build a school for the children of Malual in South Sudan, which had been destroyed.

In addition to his role as a pastor, many in the community may have known him from his prior employment in Albert Lea at Home Depot, Walmart and Hy-Vee.

At the time of his death, he and his wife had eight children, ranging in age from 3 to early 20s.

Ann Austin, executive director of the United Way of Freeborn County, said Dup and his wife have always been leaders in the community, serving as a voice for the Sudanese.

She said Dup helped organize the Sudanese when they began moving to town and helped people both in and outside of his role as pastor to obtain services as needed.

“He was a good man,” said Lona Berg, lead supervisor for the child care program offered through Adult Basic Education. “He was dedicated to his faith and adored his wife and kids. He was very proud of his children.”

Berg said she has known the Dup family for about eight years and has given child care to the family’s two youngest children.

She became close friends with Mary after Mary attended classes at Brookside Education Center to learn English. Mary has since become an interpreter for the school district and for the Freeborn County Department of Human Services.

Berg and Ruach said people are coming from all over the country, including the neighboring state of Iowa and Nebraska, to offer support to Dup’s family.

“That’s what they do, they all come together,” Berg said.

Ruach said there will be several hours of prayer before and after the burial on Saturday and also on Sunday. He noted the Sudanese in the community came together this past Sunday for an additional prayer service.

He said out of the $10,000 cost for the funeral and burial, about $4,500 still remains. Freeborn County contributed $1,450, and members of the Sudanese community contributed a few thousand as well.

Memorials may be given to the Simon Ter Dup Memorial Fund at Wells Fargo Bank.

Fundraisers are also in the works at St. John’s Lutheran Community, where Simon’s wife, Mary, has worked as a certified nursing assistant for several years.

Nurse Manager Anissa Anderson said people have donated food, paid time off, money and other household items, and St. John’s is organizing a painting class with local painter Annette Camacho, of which the proceeds will go to support the family.

She asked for community members to be kind and understanding for Dup’s family.