Funeral services for Archie G. Knutson, 100, of Glenville will be at 11 a.m. Saturday at Round Prairie Lutheran Church. The Rev. Kent Otterman will officiate. Interment will be at Round Prairie Cemetery. Military honors will be accorded by local servicemen’s organizations, VFW and American Legion. Visitation will be one hour prior to the service at the church. Online condolences are welcome at www.bayviewfuneral.com. 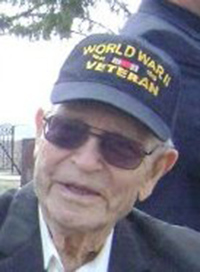 Archie G. Knutson was born Oct. 29, 1914, on the family farm in Freeman Township, the son of John and Louisa (Aanerud) Knutson. He was born in the same house in which his father was born, which was the first frame house in the area. Archie attended country school for nine years in Freeman Township; he flunked one year on purpose to be in the same grade as his brother. Archie worked on the family farm until 1939 when he was in an airplane accident that left him in the hospital for four weeks.

Archie served his country from 1943 to 1945 as a tech. fourth-grade in the 756th Chemical Depot Co. attached to the 8th Air Force. He was stationed in England and ran the motor pool that transported all the incendiary bombs used in the European Theater.

After returning from the war Archie was united in marriage to Marguerite Gillikin of Lufkin, Texas, on Sept. 11, 1945. Archie worked as a tool maker at Consolidated Aircraft in San Diego and later as a cabinet maker. He retired from Streater after 19 years with seniority No. 2. He was the founder of Knutson Boats Inc., which produced 85 tri-hull fiberglass boats of his own design in his garage and 26 other fiberglass inventions for customers including the U.S. Forest Service and Boeing before selling the company to Edwards Manufacturing of Albert Lea.

Archie was proud of his Norwegian heritage, being the grandson and great-grandson of immigrants who also fought in the Civil War. He was a member of Round Prairie Lutheran Church, the Emmons American Legion, VFW, Good Sam Camper/Ranch Club, Coachman Club, Lea Area Petra Club, Sons of Norway and the National Aeronautic Association with a membership card signed by J.H. Doolittle and Eddie Rickenbacker. Archie enjoyed fishing and hunting, tenting to Alaska and traveling, becoming a snowbird after retirement. Archie was proud to have built the home he and Marguerite lived in for 65 years, starting with sawing down trees and planing them into lumber. He also built two cabins on Crooked Lake in the Superior National Forest, where he went as often as possible. He especially loved flying; he got his pilot’s license in his 20s, went barnstorming in his own plane, was one of a group of pilots who started the Albert Lea airport and he also built several airplanes which included an ultralight and the framework for a Pietenpol. At 97, Archie made his last flight, an event covered by three local TV stations. Archie always regretted that he never got his seaplane license.

Archie worked hard all of his life. He was capable, creative, a true Jack-of-all-trades, patriotic, absolutely reliable — a smart man also blessed with common sense. Minnesota has lost a great son.

Survivors include his daughter, Mary, and many nieces and nephews.

Archie was preceded in death by his parents; wife, Marguerite; brothers Earl and Ralph; and sister, Junice Citurs.