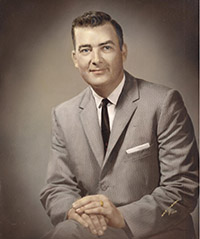 He was born July 17, 1927, in East Chain to Major and Miriam (Lamperd) Palmer. He grew up in Ceylon and attended District 17 country school, graduating from Ceylon High School.

After their graduation, Arza and a number of his classmates immediately joined in various branches serving their country. He served in the U.S. Navy and was sent to Great Lakes and then directly assigned to the U.S. Hornet (CV-12) carrier vessel in California, to Hawaii, then the Philippines and throughout the Pacific. After receiving his honorable discharge at the end of the war, he and his classmates returned to their homes in Ceylon.

Again, Arza and his classmates boarded a bus for Albert Lea in search of future careers. The next day he was employed at Wallace’s store in the shoe department. Then a position was offered to him at Firestone, where he worked his way up to manager. As Firestone was outgrowing its location, management decided to relocate to a larger city. He was offered to manage their store at the new location but chose to remain in Albert Lea beginning his lifelong career. His last employment was a manager at Wal-Mart in Albert Lea and then he transferred to the Owatonna Wal-Mart until his retirement.

The celebration of life service will be at 10:30 a.m. Saturday at the Bonnerup Funeral chapel in Albert Lea with visitation one hour prior to the service and from 5 to 8 p.m. Friday. A lunch will be served after the services. Interment will follow at the Tenhassen Township Cemetery in rural Ceylon. Military honors will be present.

Arza’s friends remember him for his friendly enthusiasm and natural kindness toward others, his exemplary attitude and his optimism.

A special thanks for the kindness of Dr. Edward Shaman of Mayo Clinic Health System in Albert Lea, nurse Carolyn and all the dedicated staff at Hospice and volunteer, Rick, for their kind, loving care they provided to Arza and concern for the family.

He was preceded in death by his parents Major and Miriam Palmer; sister, Irleen Deling; brothers Dewey Palmer and James and Valerie Palmer; parents-in-law Oscar and Mabel Sandsmark; and brother-in-law, Jack Fraley.

In lieu of flowers memorials are preferred to Tenhassen Cemetery in Ceylon.