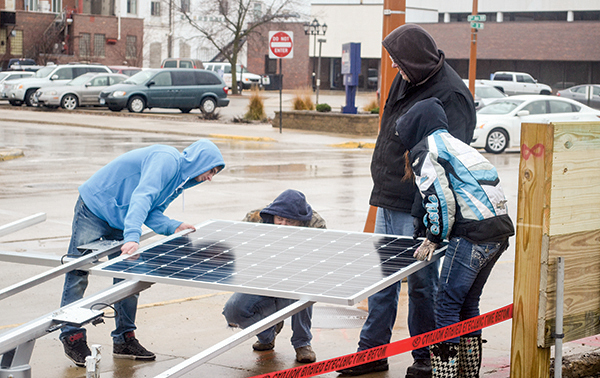 AUSTIN — Despite a rainy, fog-filled start to the week, the students in the solar installer course at Riverland Community College are counting on the sunshine as they piece together a new solar electric vehicle charging station in Austin.

The students placed the charging station downtown in a city parking lot south of the Historic Hormel Home. Though the project is not done, the plan is to have it working by the end of December.

“We’re just providing the labor, which is a learning opportunity for these renewable energy students.”

The station will be able to charge two cars at once. Not all of the details are worked out yet, but Kelly Lady, the energy services consultant from Austin Utilities, said there may be a fee associated with use. She has high hopes for the project.

“There’s a lot of buzz about that right now, and because we are the electric provider in the community, we felt that it was on us to be the first ones to offer electric vehicle charging in public,” she said.

The charging station is the first in Austin, but there’s one on the Riverland campus in Albert Lea. An Albert Lea hotel also is home to chargers for Tesla autos.

Vietor was excited not only about the project, but about the experience the students were able to gain through helping out.

“We’ve worked with Austin Utilities on other projects,” Vietor said. “It’s a collaboration that lets the students learn in the classroom and in the real world.”

For second-year student Dianna Tatge, it was a chance to get to know more of what the work may entail.

“I’m going to school so it’s nice to have hands on experience and get a little bit more field experience,” she said.

The class hadn’t done much on solar panel installations, and she was excited about learning how they connect and lay out. She hopes to get a job working with a wind turbine company.

“Green energy is very exciting to me, and it feels like I can make a difference for something,” Tatge said.

Tatge is from Wells and is studying the solar class at the Albert Lea Riverland campus.

One hope is that the charging station will pull people in from the interstate who may not normally stop in Austin.

“They might get out and have lunch downtown, or go to the Spam Museum, or go to the Artworks Center,” Lady said. “They’ll pass their time away downtown while their car is charging.”

The collaboration will be measured in the data that will come from the project. The data of output of the panels, and the usage of the station, will all be measured and used as part of the curriculum in the Riverland class. It will also be available to the public and the other schools.

The station takes up two parking spaces, which Lady said was worked out with the people who previously parked there, and there were no complaints. The project, which cost about $20,000, was 75 percent funded through grants and donations from the Hormel Foundation and the Clean Energy Resource Team. Riverland donated the students’ work and time in installation. They also gave use of the solar panels to the project, though they still retain ownership, in part to ensure data collection. When panel technology improves, they hope to switch the panels out to keep up the most current data.

“Our intention is to use it on a small scale to see how electric vehicle charging impacts our grid during our peak usage time,” Lady said. “We don’t really know at this point how much it’ll get utilized, but we feel somewhat confident that the usage of it will grow over time.”