Funeral services for Carl Johan Larsen of Albert Lea will be held at 10:30 a.m. on Tuesday at the Brownsdale United Methodist Church in Brownsdale. The Rev. Sharon Goetzinger will officiate. Interment will be in 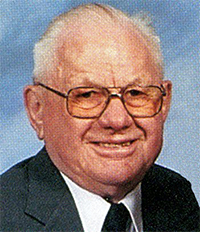 Visitation will be one hour before services at the church. Bonnerup Funeral Service is assisting the family. Carl died on Christmas Day at the Mayo Clinic Health System of Albert Lea. He was 96.

Carl was born on a farm near Lake Crystal to parents John and Katrine (Nielsen) Larsen, Jan. 21, 1918. He attended schools in Garden City and graduated from Wellcome-Memorial High School with the class of 1936. He moved with his parents to a farm south of Brownsdale in 1936, and farmed there until he moved to Albert Lea in 1988.

He married Helen Stevens at the United Methodist Church in Brownsdale in 1956. She passed away in 1963. He married Evelyn (Helle) Westrum in 1972 at First Lutheran Church in Albert Lea.

He belonged to the United Methodist Church in Brownsdale where he was an active member. He was also a member of the Danish Brotherhood, Danish Sisterhood and the Eagles Club. He had been a member of the Sons of Norway. He was very proud of his Danish heritage. He enjoyed traveling and had been in every state except Alaska, and had traveled to Denmark and Norway twice.

He also enjoyed woodworking, gardening, crafts, puzzles and especially visiting with family and friends. He was an avid Minnesota Twins fan.

He was preceded in death by his parents, John and Katrine Larsen; wives, Helen and Evelyn, brother August (Bonnie) Larsen and sister-in-law Deloris Larsen.