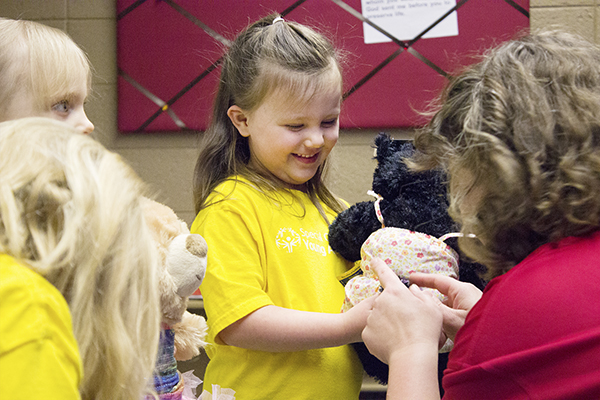 A United Preschool student excitedly shows off her bear’s tail to Audra Beussman on Thursday. United Preschool got a donation of 200 Build-A-Bears from Young Athletes, who were donated the bears by Starkey Hearing Technologies. – Hannah Dillon/Albert Lea Tribune

This year, students at United Preschool got an early — and generous — Christmas present. 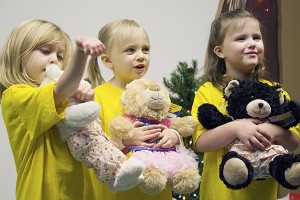 The Build-A-Bears came pre-dressed and in many styles, such as dresses, pajamas and superheroes. – Hannah Dillon/Albert Lea Tribune

United Preschool participates in a curriculum called Young Athletes, a program with the Special Olympics. Starkey Hearing Technologies, a hearing aid company based in Eden Prairie, donated Build-A-Bears to Young Athletes, who then distributed the bears to their participants.

Audra Beussman, a teacher at United Preschool, said the preschool was one of Young Athlete’s biggest participants in Minnesota, so 200 Build-A-Bears showed up on their doorstep.

Normally, the maker of a Build-A-Bear gets to stuff his or her bear, then pick out the clothes and accessories for it, but the bears delivered to United Preschool were already dressed. Still, there were many options from which to choose.

Beussman said she saw a scuba diver bear, a Superman bear, bears with frilly dresses and even a bear with pajamas and a sleep mask, and commented on how high-quality the Build-A-Bears were. 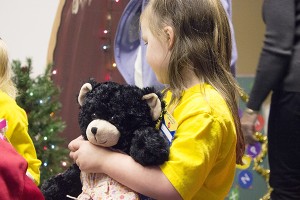 A completed Build-A-Bear can normally cost up to $45 with all of the clothing and accessories.

Each of United Preschool’s 150 students, ages 3 to 5, got to pick out any bear they liked while in groups of three to four. Four volunteers helped the United Preschool teachers organized the distribution. The preschool is at the United Methodist Church of Albert Lea.

Beussman told each group that Starkey Hearing Technologies in Minneapolis sent the students presents because they had worked so hard with Young Athletes.

Beussman said Young Athletes is a step-by-step program that students work on during muscle time, or gym, and is for students with and without disabilities. They’ve taken time off for Christmas but will start the program back up in January.

Students learn about acceptance, turn-taking and encouraging all of their peers, including those with disabilities, with Young Athletes, Beussman said. 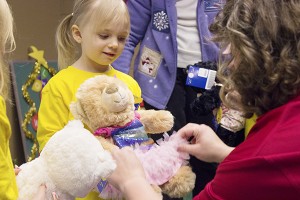 After the students picked out their bears, they immediately wanted to show off their gifts. – Hannah Dillon/Albert Lea Tribune

Annie Olson, another teacher at United Preschool, explained it as breaking down physical skills to prepare students for sports. Olson said Young Athletes is one of the best things that the school has done.

As for the leftover bears, Beussman said students with younger siblings had a chance to take a bear home for them.