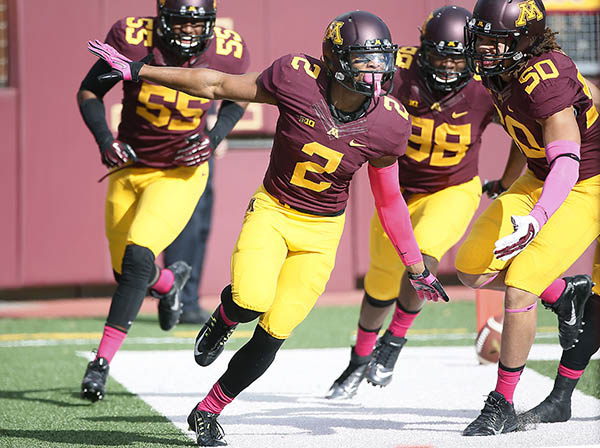 Gophers’ defensive back Cedric Thompson celebrates his interception in the first quarter as the Minnesota Gophers took on the Purdue Boilermakers on Oct. 18 at TCF Bank Stadium in Minneapolis. Minnesota came out on top, 39-38. – Elizabeth Flores/Minneapolis Star Tribune

ORLANDO — For the first time since Dec. 31, 1961, a Gophers football team will be spending New Year’s Eve getting ready for a bowl game. With a noon kickoff Thursday for the Citrus Bowl, players aren’t too concerned about watching the ball drop.

“I think a lot of guys would agree that it’s more exciting to be getting ready for a football game on Jan. 1 than hanging out with friends and watching games,” senior David Cobb said.

The Gophers will have their usual pregame meal, film sessions for position groups and an early curfew.

“The key to performance and being successful is having a routine; you know, getting to bed early,” senior Cameron Botticelli said. “I room with Gary Moore. He’s a true freshman for us, and I give him a quiz on the defenses that we’ve installed before we can go to bed. So you find a routine and you stick to it.”

Cobb was questionable because of a left hamstring injury leading into the regular-season finale at Wisconsin but still rushed for 115 yards to break Laurence Maroney’s single-season school rushing record.

“I think the trainers and strength staff did a great job with me,” said Cobb, who has 1,545 rushing yards this season. “Right now I feel great, better than I have all season.”

“Hey, I guess I’m in good company then,” Perkins said, before thinking through some of Missouri’s alumni options. “Maybe they couldn’t get Max Scherzer, and they didn’t want Gibby (Twins starter Kyle Gibson).”

Perkins, who went 19-5 with a 2.86 ERA over two seasons with the Gophers, said he “jumped at the chance” to be part of the parade. He drove up with his two daughters from his offseason home in Fort Myers for the parade through downtown Orlando.

“I’m happy for Jerry [Kill],” Perkins said. “The few times I’ve gotten to talk to him, he seems like a really nice guy and works his butt off. That whole staff does.”

The Gophers will hold a walk-through at the Citrus Bowl on Wednesday, but Tuesday was their last full practice. Afterward, they held their annual tradition of having underclassmen carry the seniors off the field.

Moore and two other freshmen defensive linemen — Steven Richardson and Andrew Stelter — carried Botticelli, who summed up his feelings for the program earlier in a news conference.

“What is rare is a man like Coach Kill and his staff and those types of men who can come into a situation where the job wasn’t getting done and implement a strategy and to inspire a group of young men to get it turned around and do it the right way.

“That’s remarkable. And I have to give all credit to Coach Kill and his staff.”

No. 16 Missouri takes on No. 25 Minnesota in the Buffalo Wild Wings Citrus Bowl at noon Thursday. The game is slated to be broadcast on ABC affiliates.