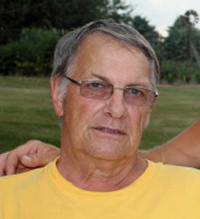 Dale Raymond Klocek was born Feb. 21, 1952, to Raymond V. and Catherine T. (Lenort) Klocek in Wells. Dale was a member of St. Casmir Catholic Church. He attended and graduated from Freeborn High School. After schooling he enlisted in the United States Army and served his country until his honorable discharge in 1975. He was awarded the Army Commendation Medal for his meritorious service.

On Aug. 16, 1980, Dale was united in marriage to Candice Ann (Lambrecht) in Albert Lea. The couple lived in the Freeborn and Alden area. Dale was employed in the agriculture industry and was self-employed. Dale was a member of the Alden American Legion for many years. In his free time he enjoyed hunting, fishing and vegetable gardening. He also looked forward to hosting deer camp, spending time with his family making bologna and family summer campouts. He was grateful for the time he spent with his nieces and nephews.