Memorial services for Esther Quam, 99, of Albert Lea, and formerly of St. Paul, will be at 10:30 a.m. Thursday at the St John’s Lutheran Community chapel. Deacon Mike Ellis will officiate. Friends may greet her family one hour prior to the service at St. John’s. Online condolences are welcome at www.bayviewfuneral.com. 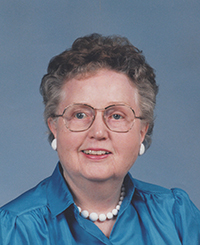 Esther Quam was born Sept. 5, 1915, in Pipestone to Samuel and Inga (Larson) Quam. She grew up on a farm in Kandiyohi. After high school Esther worked as a cosmetologist in Albert Lea for a short time. During World War II she was employed at Northwest Airlines at Holmen Field in St. Paul in defense work. Esther was trained to do electrical wiring on various equipment for B24s, B25s, B36s and B52 bombers. After the war ended Esther spent several years in Tucson, Ariz., working for Howard Hughes Aircraft. In 1949 Esther moved to St. Paul and was employed as a clerk at Moudry’s Apothecary until her retirement at 70.

Esther was a member of Central Presbyterian Church in St. Paul where she did volunteer work. Esther enjoyed traveling, reading and attending concerts.

She is survived by one brother, Dr. Oliver (Jean) Quam, of Auburn, Calif.; sister-in-law, Winifred Quam, of Kandiyohi; and several nieces and nephews including Carol Langer of Albert Lea.

She was preceded in death by her parents and nine siblings.

Esther will be lovingly remembered by her family for her grace, humility and wonderful sense of humor.