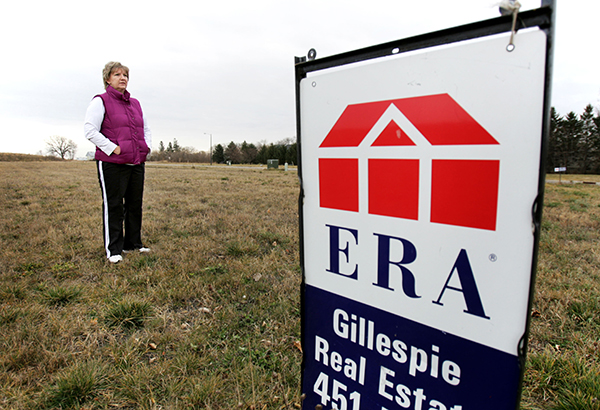 Ginny Busch, mayor of the city of Claremont, stands in a empty lot that was intended to be someone’s home. – Alex Kolyer/Minnesota Public Radio News

CLAREMONT —- For three years, the southeastern Minnesota city of Claremont has offered free residential lots to people willing to build a house. Officials got the idea from the city of New Richland, which is also trying to give land away.

But in Claremont, there have been no takers.

It’s a small place — 500 residents, three churches, three parks, a gas station and a bank, all in one square mile.

The city’s located between Owatonna and Rochester along busy Hwy. 14. About a decade ago, city officials signed on with a developer to build a 15-home subdivision on the city’s north end. The hope was to attract workers from both cities to live there.

So the city issued $450,000 in bonds to build roads, sewers, streetlights and a wastewater lift station for the subdivision.

City Clerk and Treasurer Liz Sorg said the developer bought the land and planned to build and sell homes to pay the city back.

“By the time he got his plans together and we got our plan all set,” she said, “it was about 2005 when he got the infrastructure in and he built one home out there.”

By 2006, the developer defaulted and the city took the property back. Sorg said no one wanted to buy the land.

“And then we said, ‘Well, they’re not going. Maybe we could just give ‘em away?’”

The city advertised the free lots in local papers, announced the giveaway on the city’s website and put a big sign on Hwy. 14. But no one was interested.

“If I were driving by and saw the free sign, I’d say, ‘Oh, yeah?’” Gray said. He thinks people assume there’s a catch.

There are some requirements to get the land for free, like income restrictions (no more than $74,200 for a family of two) and $1,000 in administrative fees.

But Sorg said that’s about it.

“First come, first served,” she said. “Fourteen choices. And some of them, they’re not all the same size lots. Some are a little bit bigger than the others.”

Sorg said getting families to Claremont would help offset the bond repayment — help the city could really use. And giving away the land would also bring about a dozen families to town, which Sorg said is what officials wanted to begin with.