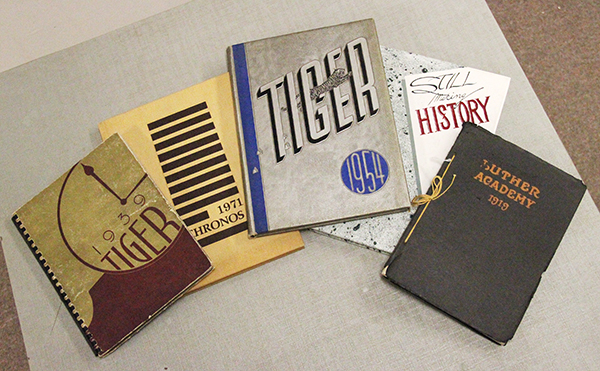 Yearbooks of the past are available for purchase at the Freeborn County Historical Museum. From left are a 1939 Tiger from Albert Lea High School, a 1971 Chronos from Lea College, a 1954 Tiger, a 1989 Tiger and a 1919 yearbook from Luther Academy, a Norwegian Lutheran Synod high school that closed in 1928. The museum also sells yearbooks from Alden-Conger and Glenville-Emmons schools. – Tim Engstrom/Albert Lea Tribune

Memories of years past

Sales of high school yearbooks at the Freeborn County Historical Museum have been clipping along ever since they were posted on the Internet in the summer of 2013.

And the sales typically pick up during the Christmas season, said Director Pat Mulso.

“Ever since my son took photos of them and put them on the website, we’ve been selling them like crazy,” she said.

The museum has always sold them, but now more people are aware of the fact. She said people buy them for gifts for friends and relatives, such as during the holidays or for a class or family reunion.

“It gives a look into the past for a grandparent or a relative,” Mulso said.

The museum has yearbooks for sale for Albert Lea High School going back to 1913 and as recently as 1998. The yearbooks were called Ah La Ha Sa or Ah-La-Ha-Sa in the early years. In 1938, the yearbook became the Tiger. The term remained on the cover until 1988, and from then forward Tiger appeared only some years.

There are yearbooks for Lea College and Luther Academy, too. Lea College offered college classes from 1966 to 1973 primarily in the Lake Chapeau neighborhood and downtown. Luther Academy was a Norwegian Lutheran Synod high school that existed from 1888 to 1928 primarily at what is now Academy Park.

The Freeborn County Historical Museum, 1031 Bridge Ave., keeps at least two of every yearbook from schools in Freeborn County for the sake of posterity. The rest are available for purchase. She said people find and donate them when they clean houses or when relatives pass. Some are discovered at the Salvation Army Thrift Store.

“We don’t purchase them. They all get given to us,” Mulso said.

Almost all arrive in good shape, though some have a bit of writing inside.

She said the museum accepts yearbooks from Alden-Conger and Glenville-Emmons school districts, too. She said people from those schools can check with the museum to see if any old-time yearbooks are in stock.

The yearbooks cost $20 at the museum counter. They cost $29.95 when the museum has to ship them.

The proceeds go toward activities at the museum. For instance, the museum is now open on Saturdays, and on those mornings the museum staff provides activities for children. Mulso said the yearbook sales allow the museum to purchase supplies for the activities.

“If anyone has yearbooks anywhere in the county, we would be happy to accept,” she said.

Where to buy: The Freeborn County Historical Museum or www.fchm.us