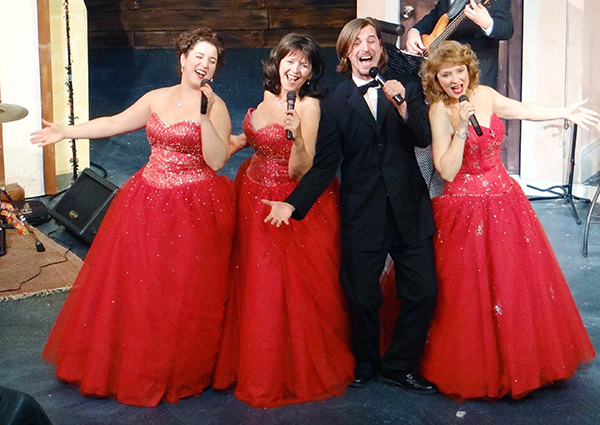 From left, Sophie Grimm, Colleen Raye, Reed Grimm and Debbie O’Keefe harmonize for the holidays at a recent show. The dynamics between these performers and audience change with each show, keeping it fresh and lively. – Provided

Set your clocks on Friday to “Jingle Bell Time” when the Girl Singers of the Hit Parade present their Christmas show in downtown Albert Lea.

Leave the holiday bustle outside and get ready to raise your voices, tap your toes and lift your hearts to the soothing sounds of classical holiday songs. 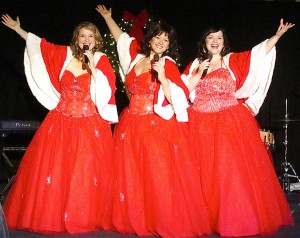 The Girl Singers of the Hit Parade — Debbie O’Keefe, Colleen Raye and Sophie Grimm — bring nostalgic holiday songs to life, with the help from the audiences, at their Christmas shows. – Provided

This will be the Girls’ third appearance in Albert Lea and their program will charm audiences with songs like Brenda Lee’s “Rockin’ Around the Christmas Tree,” The Andrews Sisters’ “Merry Christmas Polka” and “Winter Wonderland” and McGuire Sisters’ “Christmas Alphabet.”

The Girls are Colleen Raye, her daughter Sophie Grimm and her sister Debbie O’Keefe. Her son Reed Grimm will also join in on a couple songs.

Growing up in Wisconsin, Raye said she watched Lawrence Welk and other musical variety shows on television. Her program pays tribute to those shows filled with talent, costumes, skits and music.

“When you think of all the great Christmas songs they’re all from that era, from ‘Rudolph’ to ‘Winter Wonderland,’ they’re from the 1950s and 60s,” she said. “Our family always sang together, so I wanted to do that harmony, like the Lennon Sisters. I wanted to re-create that spirit of those Christmas specials, that warm feeling.”

Music has infused Raye’s life since a child. She performed with her brother’s band as a teenager, majored in music in college, toured nationally with a night club act, founded a successful night club band with her then-husband and raised four children who are all successful musicians.

Raye is an accomplished singer, actress and entertainer, as well as a musical coach, composer and producer. She has traveled the country performing on stages ranging from the Tropicana in Atlantic City and Las Vegas to the Oklahoma and North Dakota state fairs.

Raye has created and produced a series of “Girl Singers” shows, including “The Girl Singers of the Hit Parade” and a new show called “Sinatra and Company — Music From The Rat Pack Era.”

Sophie Grimm is Raye’s youngest daughter. Grimm is taking a month off from her music and acting career in Chicago to do Christmas shows with her mom. She has performed at several Chicago venues including Marriott Lincolnshire, Chicago Shakespeare Theatre, Drury Lane and Broadway In Chicago.

Grimm sings throughout the area with The Matt Reed Band, as well as in religious settings and with her family in Girl Singers of the Hit Parade.

Debbie O’Keefe is Raye’s younger sister. Since a teenager, she and Raye have performed at various venues throughout the United States.

O’Keefe is also a guest soloist with The Sheldon Brass Band in Red Wing and The Century Big Band in St. Paul. In addition, she is the female vocalist for the Minnesota Jazz Orchestra and Tim Patrick’s Blue Eyes Band.

Reed Grimm is a drummer but will step out from behind the set to sing a few tunes with his mom, sister and aunt. He began performing with his parents across the country at age 2. His musical career continued with several bands and high school musicals.

Reed has graduated from college and now performs throughout the La Crosse area with his band, Shoeless Revolution. Recently, he performed overseas for U.S. troops in Kuwait and Qatar.

This musical family will have the audience singing, smiling and maybe even performing with them on stage. The show includes a fun-filled rendition of “The Twelve Days of Christmas” and sing-a-longs to “White Christmas” and “Silver Bells.”

“The audience members will walk out of there having had a few laughs,” Raye said, “and maybe even being involved in the show.”

Who: Girl Singers of the Hit Parade Christmas show