In uniform but not out of character 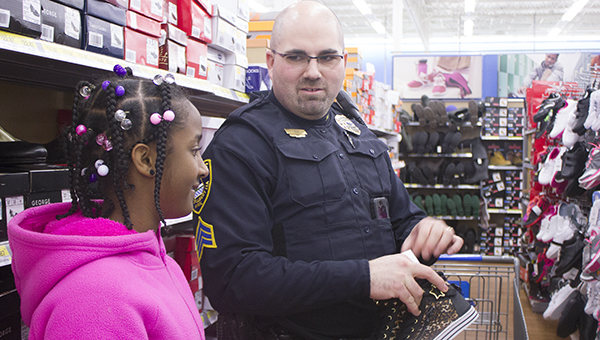 Albert Lea Police Department officer Tim Harves talks with Tyliyah Jolly about shoes in one of the shoe aisles at Walmart on Thursday during Shop with a Cop. Officers and deputies with the Freeborn County Sheriff’s Office were paired up with children from local schools. – Sarah Stultz/Albert Lea Tribune

That was the outcome on Thursday of the second year of Shop with a Cop, in which local law enforcement officers accompany area underprivileged youth on a Walmart shopping spree.

While the event provides holiday gifts for less-fortunate families, it also is an opportunity for positive interaction with laws enforcement officers, according to a press release. 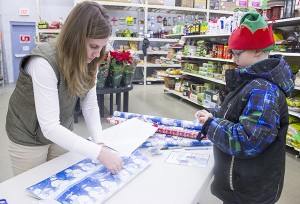 “It’s a nice reminder we can have a positive impact on families and kids,” said Albert Lea police Sgt. Steve Charboneau.

The children, who were in first through fifth grade, were from different elementary schools within Albert Lea Area Schools. School officials selected them to participate.

Though the children each had the opportunity to buy whatever they chose with a $100 gift card, many chose to buy for their parents, siblings and friends before they splurged on something for themselves.

The money spent was donated through a grant with the Walmart Foundation,

Once the children spent their money, they took their items to a section of the store to be wrapped by other volunteers, many of which were family or friends of the officers or from the school district. 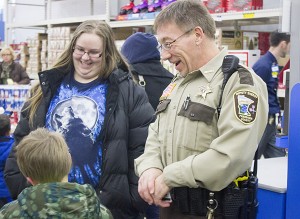 Freeborn County Sheriff’s Office deputy Darin Hable, right, laughs Thursday with one of the children at Shop with a Cop at Walmart. – Sarah Stultz/Albert Lea Tribune

Jolly, who attends Hawthorne Elementary School, picked out gifts for her father, her mother, her sister and even her best friend before deciding to purchase a pair of shoes on clearance for herself.

“They did a lot for me, and I want to give something back in return,” she said, of why she didn’t spend the entire amount on herself.

All of the law enforcement officers participating volunteered their time.

Walmart also provided treats and beverages for the families, and Santa Claus was on hand to talk with the children, too.