Joan Marie (Kavka) Steinhauer, 84, of Walters died Thursday, Nov. 27, 2014, at Mayo Clinic Health System in Albert Lea surrounded by her family. A Mass of Christian burial will be at 10:30 a.m. Wednesday at St. Casimir Catholic Church in Wells. Visitation will be from 4 to 7 p.m. Tuesday at Bruss-Heitner Funeral Home in Wells with a prayer service at 7 p.m. Visitation will continue one hour prior to the service on Wednesday.  Interment will be in the Walters Cemetery with the Rev. Thomas Niehaus officiating.  Please see www.brussheitner.com to leave online condolences. Bruss-Heitner Funeral Home of Wells is in charge of arrangements. 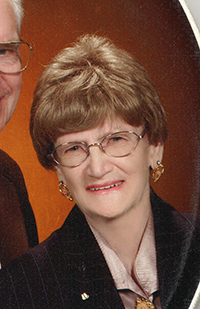 Joan Marie was born Sept. 27, 1930, the daughter of Francis Joseph and Anna Helen (Sweda) Kavka. She grew up in the small coal mining town of Throop in northeastern Pennsylvania with her seven brothers and sisters. When family needs allowed her to pursue her dream, she enlisted in the Navy in 1950. Following basic training she was transferred to San Diego where she served as a disbursing clerk on the naval station.  It was during that year on a chance blind date that she met another young sailor, Bernard G. Steinhauer. It was not love at first sight, but their love for each other bloomed and in late July 1951 they married in the naval station chapel.

After her Navy service was completed she became a fulltime homemaker and had three children, Bernard J., Denise and Arnold. As a Navy wife and mother, she faithfully followed Bernard in his Navy career from California to New York, and then Connecticut.  At times she served as both mother and father while running a “tight ship” of a household during many long submarine deployment separations.

When his career of over 22 years in submarines ended she started the next chapter of her life when the family settled in Minnesota. It was during this time her loving heart would move her to welcome Thomas into the family. One final move would take her to the Steinhauer family farm in Walters where she found a welcoming community. Here she found peace taking care of her flowers and vegetable garden, as well as her chickens, ducks and geese. She was blessed with 63 years of marriage to the same wonderful man, children who loved her deeply, six grandchildren and two great-grandchildren. Her world always revolved around her family, her church and community involvement, her many friends from the area, as well as her extended Navy family all over the country and her unwavering Catholic faith. She will always be remembered for her great laugh and smile, her caring for others, her big heart and her love of God.

She is preceded in death by her parents; and sisters Irene Kavka, Jane Kavka, Mary Rizzo and Ann Medric.