Funeral services for Julia Barbara Podlogar of Albert Lea will be at 2 p.m. Wednesday at St. Theodore Catholic Church in Albert Lea. The Rev. Timothy T. Reker and Deacon Mike Ellis will officiate. Visitation will be one hour before service at the church. 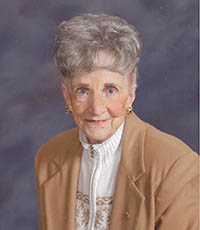 Julia (Biondi) Podlogar was born July 20, 1923, in Chisholm to Rose and Valentio Biondi. She graduated from Chisholm High School and was later married to Adolph (Andy) Podlogar on Oct. 10, 1942. The lived and raised their family in Chisholm and later moved to Babbitt. They enjoyed watching their sons in sports and after they graduated she began working as a nanny for the local doctor’s family. Julia was active in many church activities and clubs, along with her four special friends. This kept her busy after her husband’s passing in 1990. Julia moved to Albert Lea in 2010 to be near family. She made many friends with her warm, friendly manner.

Julia was preceded in death by her parents Rosa and Valentino Bioni; her husband, Andy; brothers Joe, Allio and Rico Biondi; and sister, Mary Buterac.

The family would like to express their appreciation to the staff at Good Samaritan Society for their fine care and love of Julia.