Locals with ties to Cuba react to policy shift 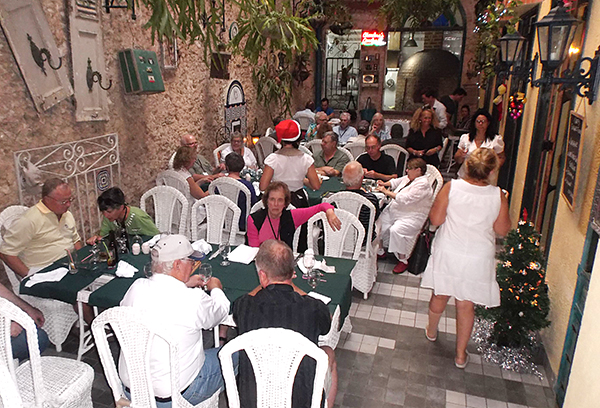 People gather to dine at a pizza restaurant in Cuba. The government does allow a small amount of private enterprise, mostly family-run businesses. They are termed paladares. – Provided

The best aspect of the Obama administration announcing the thawing of relations with Cuba is the possibility of improving education, said Lyan Martinez, owner of The Cuban Island Restaurant in Albert Lea.

At the same time, Martinez, 29, is skeptical. He said his issue is the economy and whether working people actually will benefit from opening Cuba to capitalism. 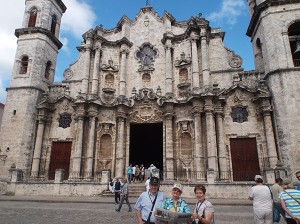 Tourists with People to People read a newspaper in front of the Cathedral of the Virgin Mary of the Immaculate Conception in Old Havana. – Provided

Still, there is hope. As an example, he said people might go to school for a job that requires tools, such as mechanic, electrician or carpenter, but then they don’t have tools, so they go drink instead of work, he said.

“Maybe they will be able to have careers,” Martinez said.

He also worries whether opening Cuba will cause an increase in crime. He said it is a very safe country because of strict laws.

“I am going to wait and see,” Martinez said.

He misses relatives in Cuba, including his mother. Martinez escaped Cuba eight years ago on a small boat. He and others didn’t head north across the Straits of Florida like most refugees from the Communist Party-controlled island. They headed south out of the Gulf of Batabano and then westward across the Caribbean Sea seeking Mexico.

He said they were afloat for eight days before being picked up by a Mexican vessel, then he spent time in a Mexican jail before securing his release through his father in Florida. He eventually made his way to relatives in Albert Lea, where he dreamed of opening up a restaurant. 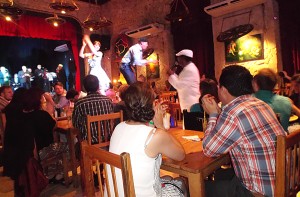 The Buena Vista Social Club is among the original nightclubs in Havana. Having closed in the 1940s, it now is open again and is a popular spot for tourists. – Provided

Just up the street, Larry Alvey of 4 Seasons Travel, 130 W. Clark St., just got back from Cuba earlier this month. It was the second trip for him and David Nelson, also with 4 Seasons Travel.

They went there with about 30 people — but not to the well-known all-inclusive resorts that don’t show what Cuba is really is like. No, they went with a little-known organization called People to People, which guides Americans to meet Cubans through a special permit issued by the U.S. Treasury Department.

Alvey and Nelson traveled from Camaguey in central Cuba to metropolitan Havana. They even saw the Bay of Pigs, site of a failed 1961 invasion of a CIA-trained force of Cuban exiles.

When Alvey and Nelson heard the news Wednesday that the U.S. and Cuba were planning to normalize relations, they were excited.

Still, they know nothing will be immediate.

“This is going to take awhile for all this to open up,” Alvey said. “Baby steps. It would be detrimental to open up all at once.”

The people on the trip they took were from Minnesota, Iowa, South Dakota and even a couple from Denver and a couple from Chicago. There was an American guide and a Cuban guide. They met farmers, ranchers, teachers and even a ballet class — many walks of life. They saw old and new parts of Havana and, of course, walked along Havana’s El Malecon, a famed roadway and seawall five miles long.

Alvey spoke a few days ago with their Cuban tour guide about the news.

“He said he was still tingling because the bells were chiming all over Cuba,” Alvey said.

Hope is a word he heard from many Cubans while visiting the island. He said while the South Florida population of Cubans might oppose opening relations, the people of Cuba still living in poverty and hunger favor it.

“It’s because they have hope that someday it will get better,” Alvey said.

He also said he was glad Pope Francis was involved, as he can be a bridge for relations between Cubans domestic and abroad. The island residents, like other Latin American countries, largely practice Catholicism.

Alvey and Nelson said they already have another People to People trip to Cuba in the making for next year.