Funeral services for Lois Margaret Wangen will be at 10 a.m. Saturday at Grace Lutheran Church in Albert Lea. Associate in Ministry Milt Bighley will officiate. Visitation will be one hour prior to the service at church. Interment will be in Hillcrest Cemetery in Albert Lea. 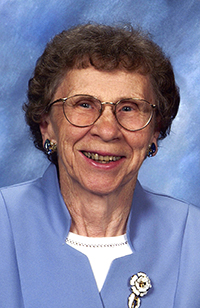 Lois Margaret Wangen passed away peacefully Sunday, Dec. 21, 2014, at Mayo Clinic Health System of Albert Lea. She was 87. Lois was born Dec. 16, 1927, in Osage to Luella and Lawrence Hartwig. She grew up in Osage, graduating from Osage High School.

After graduation she moved to Albert Lea where she worked as a secretary. She met Gerald Wangen and on July 14, 1951, Lois and Gerald were married at St. John’s Lutheran Church in Osage. They made their home by Hartland for 29 years. Lois helped her husband with farming and was a homemaker for their two daughters.

Gerald and Lois moved to Albert Lea for retirement where Lois was very active in Grace Lutheran Church. She was a member of the Altar Guild and wedding committee for many years. In Lois’ free time, she enjoyed cross stitching and putting together puzzles.

Lois is preceded in death by her parents Lawrence and Luella; brother, Wilmer (Isabelle) Hartwig; and grandson, Daniel Schoon.