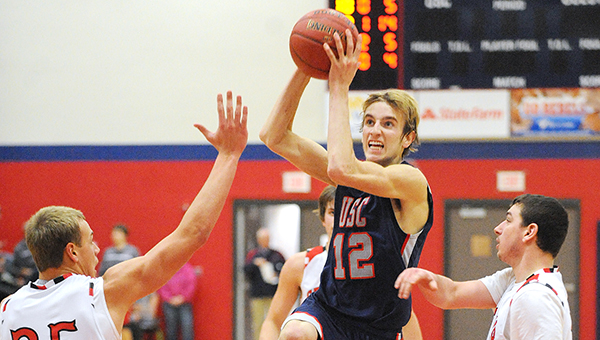 Leaders on the hardcourt emerged before winter break in the Tribune’s seven-team coverage area.

The following is recap of boys’ basketball this season:

Wins have eluded Albert Lea through the winter break, but the team made strides toward a more balanced offensive attack on Dec. 23 at Stewartville.

Dedoch Chan, a sophomore, has been a double-double machine in the paint, and in the win over Stewartville, the Tigers had two other players score in double figures: the Jakes. Jake Thompson hit five 3-pointers to score a team-high 22 points, and Jake Kilby had 11 points and nine rebounds.

Backcourt production will be vital to Albert Lea’s success through the final 16 games of the regular season. The Tigers’ next two opponents are Mankato East (4-3 overall, 6-5 Big Nine Conference) and Owatonna (4-4, 4-5). Both teams are in the bottom half of the conference standings.

The Knights matched their best start since 2006 with five straight wins, but they continued with four consecutive losses.

Eli leads the team with 18.9 points per game. Wallin averages a team-high 10.6 rebounds per game.

Through six games, the Wolverines have a pair of Southeast Conference wins.

Derek Van Ryswyk, a sophomore forward, filled up the stat sheet with 35 points 17 rebounds, seven blocks and four assists in the win over LeRoy-Ostrander.

Marshal Hall, Seth Chapek and Carter Dahlum also scored in double figures against the Cardinals, and coach Matson will look for them to continue to provide support.

After winning a share of the Gopher Conference crown with USC last season, the Panthers began the season with four straight wins.

The only blemish on their resume through seven games is a 70-66 home loss on Dec. 12 against Maple River, a team with a 9-1 record. Maple River’s only loss was against Waterville-Elysian-Morristown.

NRHEG has positioned itself in second place in the Gopher Conference standings.

With four returning starters, the team has been led by All-Area Player of the Year, Spencer Tollefson, who scored a season-high 31 points against Maple River. Senior center Kevin Kalis had 18 points in the Panthers’ 63-55 win on Dec. 11 at Tri-City United, and he broke out with 25 points and eight rebounds in an 84-46 home win on Dec. 19 against Medford.

With a talented group of starters and a strong supporting cast, the Rebels posted a perfect record through the first seven games.

Two of those games were decided by fewer than 10 points, and each time senior guards Nate Pederson and Luke Trio stepped up.

Against Waterville-Elysian-Morristown, the only team to beat Maple River, Trio posted a double-double with 19 points and 10 rebounds to lead USC on Dec. 12 to a 68-63 win. Pederson led the Rebels’ scoring attack with 18 points on Dec. 19 in a 61-57 win over Blooming Prairie.

In all of Class A, USC’s QRF ranking is No. 3 behind two teams from Section 4A: Minneapolis North (9-1 overall, 3-0 Minneapolis City Conference) and Maranatha Christian (7-0 overall, 2-0 Minnesota Christian Athletic Association).

Shooting efficiency has been a priority for the Bulldogs, as they’ve won six of their first seven games.

As a team, Lake Mills leads the North Iowa Conference and is sixth in Class 2A with a field goal percentage of 53.5. It’s not all from layups, either. The Bulldogs are one of 20 teams in Class 2A to attempt 130 or more shots from beyond the arc, they’re second in the class with 56 3-pointers made and second in 3-point percentage, 42.1.

A big part of that has been Granger Kingland and Josh Peters.

Kingland is fifth in Class 2A with 155 points. He is one of 10 players in the class to make 20-or-more 3-pointers and has the second-highest 3-point percentage of anyone from that group.

Lake Mills’ marquee win so far was a 66-60 home victory on Dec. 5 against Forest City (6-2 overall, 6-2 North Iowa Conference). Kingland and Peters combined for 48 points of the team’s 66 points.

After five games, the Vikings are second in the Corn Bowl Conference standings.

Northwood-Kensett is one of three teams in the conference to have three-or-more players who average scoring in double figures. The other two teams are West Fork and Nashua-Plainfield.

Josh Einertson leads Northwood-Kensett and is fourth in the conference with 16.2 points per game, Tom Fick averages 13.0 and Justin Read, 11.8.

The Vikings began the season with a 64-59 loss at Clarion-Goldfield but rebounded with three consecutive wins. The first victory was 69-57 at home on Dec. 9 against Saint Ansgar. The Vikings had contributions from six players who scored seven points or more. Einertson led the team with 19 points; Fick and Read, 12; Tom Yezek, 10; Mason Olson, 9; and Trevor Varner, 7.