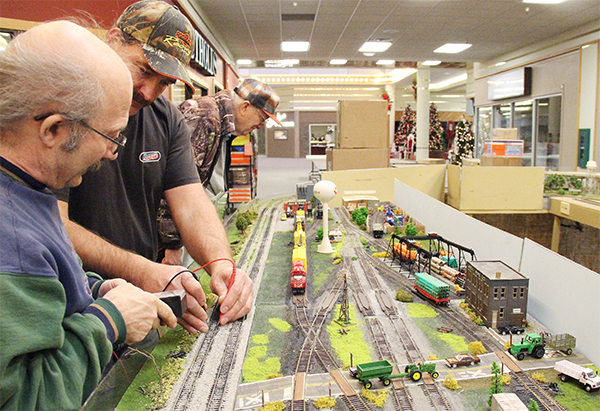 John Euhling of La Crosse, Wis., left, and Loral Hare of Prairie du Chien, Wis., test for ohms seeking to discover where wires might have been crossed during setup Friday at Northbridge Mall. They are part of the La Crosse & Three Rivers Railroad Club. — Tim Engstrom/Albert Lea Tribune

It’s 45 feet long by 15 feet wide. It’s been the model railroad layout for the Rusty Rails O Scale Club since 1990 and takes five to six hours, including breaks for conversations with onlookers, for two men to set up.

Men on Friday afternoon and evening from various organizations or on their own were setting up their toy train displays throughout the walkways of Northbridge Mall in preparation for the 19th annual Albert Lea Area Model Railroad Show & Swap Meet.

It all started 20 years ago when Tomah, Wis., stopped hosting a model railroad show. Jerry Monson of Albert Lea, who traveled to model shows all over the country selling new and used trains, saw an opportunity to host it in Albert Lea. Northbridge Mall said yes and has been supportive ever since.

“It’s an opportunity to put the hobby in front of the public,” Monson said.

Ray Holzer of Owatonna was among the men in the Rusty Rails O Scale Club, which was founded in 1985. He said the layout averages three trains running at once and sometimes a fourth. They have eight members from Minnesota, eight from Wisconsin and another who winters in Florida.

He said two rails are DC current and three rails are AC current. He said the club wanted to show what could be done in DC with O scale tracks. He said it is easy to work with and parts are actually proportionate to real railroad cars.

“We wanted to be a little different,” he said.

Terry and Theresa Hacker of Albert Lea used to go to more model shows, but now just go to the one in Albert Lea.

Terry was a longtime employee of Canadian Pacific Railroad until a heart attack in 2004 left him on disability. He runs O-gauge trains on a layout that is 14 by 8 feet, which is expanded from last year with a lift bridge that enables him to not crawl under the display to get to the center space. He and his wife were leveling the display Friday.

Meanwhile, their son, Joseph, was setting up a Lego railroad. It was the first time the Albert Lea model train show will have a Lego train displayed.

Model railroads typically are powered and throttle-controlled by the electricity moving through metal tracks to the locomotives, but the Lego train has plastic tracks.

Joseph said the engine is powered by a 9-volt battery and is controlled by a remote signal. It has rubber wheels and the tracks keep the train turning in the right direction. (Lego-loving parents, take your children to Brickmania Toys in Minneapolis on a Saturday to see spectacular Lego displays, custom parts and a big train layout.)

Vern and Sherry Kleiber have been coming to Northbridge Mall for the model show since 1999. They go to eight to 12 shows per year.

They have a layout that is built to travel and can be set up in 20 minutes, he said, if there aren’t interruptions. It is 9 by 16 feet and runs three trains. It is smaller than his previous layout, which was 11 by 20 and could run seven trains.

The display isn’t representative of a real place, like some seek to be, but Vern calls it Southern Valley. His wife, Sherry, painted all the little buildings.

He said their display has two mainline tracks but he said they are able to run many trains at once, up to 120.

They use what’s called digital command control for programming and running the model trains, allowing locomotives on the same section of electrical track to be controlled independently. 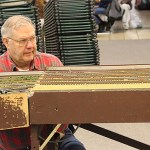 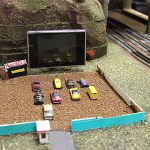 The display from an automobile backup camera serves as a screen for a drive-in movie at Vern and Sherry Kleiber’s Southern Valley display Friday at Northbridge Mall. — Tim Engstrom/Albert Lea Tribune 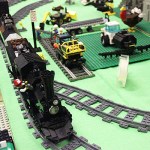 Joseph Hacker of Albert Lea set up a Lego railroad Friday at Northbridge Mall. It was his first time participating in a model railroad show. — Tim Engstrom/Albert Lea Tribune 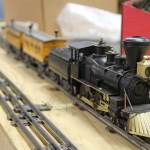 With a William Crooks steam engine, this detailed replica of a St. Paul & Pacific Railroad is owned by Albert Lea resident Terry Hacker. It was the first steam locomotive to run in Minnesota. The O-gauge model was made by the defunct Louis Marx & Co. (the maker of Big Wheel) for just two years. — Tim Engstrom/Albert Lea Tribune 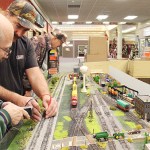 John Euhling of La Crosse, Wis., left, and Loral Hare of Prairie du Chien, Wis., test for ohms seeking to discover where wires might have been crossed during setup Friday at Northbridge Mall. They are part of the La Crosse & Three Rivers Railroad Club. — Tim Engstrom/Albert Lea Tribune 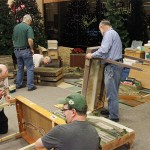 Members of the Prairie Lakes Division of the Thousand Lakes Region of the National Model Railroad Association work together to put 14 sections of display into one Friday evening at Northbridge Mall. The men were from northwest Iowa. — Tim Engstrom/Albert Lea Tribune