Meka Nielsen and Nickolas Simmons, both of Emmons, were married at 11:30 a.m. Oct. 4, 2014, at Pickeral Lake Church by Albert Lea in a double-ring ceremony. The Rev. Chris Bennett officiated. A reception followed the ceremony at Wedgewood Cove Golf Club. 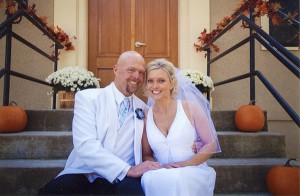 The bride is a 1995 graduate of Albert Lea High School, Riverland Community College and Rochester Community and Technical College and is employed by Uptown Dental in Albert Lea.

The groom is a 1998 graduate of North Iowa High School and is employed by Winnebago Industries in Lake Mills.

Maid of honor was Mindy Toenges, sister of the bride, of Albert Lea. Bestwoman was Angie Flo-Franks, best friend and honorary sister of the groom, of Lake Mills. Junior bridesmaid was Brianna Mann and flower girls were Madison and Brooklyn Mann, all nieces of the bride and daughters of Mindy Toenges and Tim Mann. Ringbearer was Emerson Schutter, honorary grandnephew of the groom and son of Sam Flo and Ethan Schutter of Lake Mills. Music coordinator was Justin Wentzler, brother of the bride, of Albert Lea. The bride’s mother did a scripture reading, arranged floral bouquets and decorated. The couple got married on the anniversary Nick proposed and his parents’s wedding anniversary.

A cruise to the Bahamas is planned for the wedding trip. The couple will reside in Emmons.