Now that the calendar issue is over, what’s next? 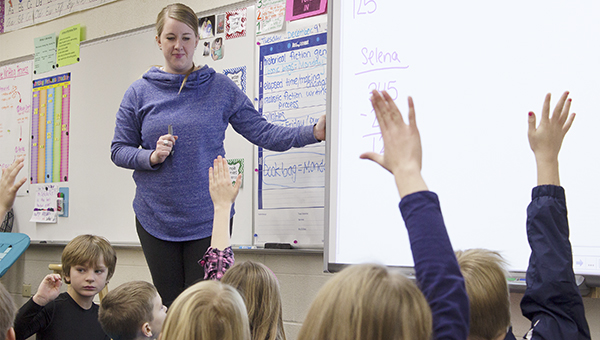 For a little over 1 1/2 years, the Albert Lea school board pursued a change to the school calendar. Earlier this month, the divided board killed the idea. It begs the question: What’s next for student achievement?

Superintendent Mike Funk said the district put a lot of planning into the calendar process, and nothing has been determined as to what’s next. However, there are some programs that are being implemented to increase student success, Funk said.

With three yes votes and three no votes on the school board, the motion for a new calendar did not pass at the Dec. 1 meeting. As the board was split, Funk said he awaits direction from the board on moving forward. 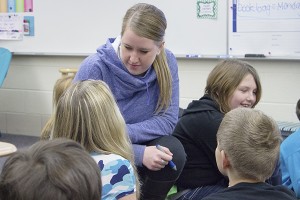 Third-grade teacher Anna Nordlocken talks to one of her students about how she solved a math problem Wednesday at Lakeview Elementary School. – Hannah Dillon/Albert Lea Tribune

After the calendar vote on Dec. 1, the school board moved from the gymnasium at Brookside Education Center to a new board room to continue the meeting, where Deputy Superintendent Lori Volz gave a presentation on taxes.

The school board said, when the proposed calendar was originally brought up, that it was just one idea to help close the achievement gap and fulfill goals.

However, community members said at the proposed calendar hearings that the other ideas hadn’t been discussed as much as the calendar.

One of the ideas to close the achievement gap that has been implemented is the Pathways to Success, which Funk said is the overall plan for increasing success in the district.

Funk said the district is aligning the high school to meet the needs of the students, and work is being done to define a career and technical pathway and an advanced placement pathway. 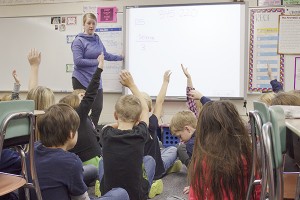 Anna Nordlocken, a third-grade teacher at Lakeview Elementary, teaches her students a math problem on Wednesday morning. According to the Pathways to Success, 80 percent of these third-graders should be on target for reading and math proficiency to fulfill the aim. – Hannah Dillon/Albert Lea Tribune

For students who align with the career and technical pathway, firefighter and certified nursing assistant certifications were available for the first time this year. Funk said the school is working with Riverland Community College for these certifications.

Funk said there is also the youth mentorship program, where students go into the community and work with different businesses. He said there are students doing that, but he wants to get more students involved.

For students at the elementary and middle school levels, Funk said students are working with Benchmark Learning, a $4,000 program that was purchased 1 1/2 years ago.

Benchmark Learning is research-based language arts instruction, and Funk said the district is seeing progress with it.

The math curriculum is also being reviewed, and changes for that could be coming this spring.

One thing that won’t be coming next, however, is a Preschool Development Grant from the U.S. Department of Education.

Funk said the district found out Wednesday that Minnesota was not selected to get a Preschool Development Grant.

Minnesota applied for an expansion grant and was one of 20 states that applied. The states that won were Illinois, Maryland, Massachusetts, New Jersey, Rhode Island, Vermont, Arkansas, Connecticut, Louisiana, Maine, New York, Tennessee and Virginia.

The school board will meet again for the first time since the calendar decision at 5 p.m. Monday at Brookside Education Center.