OWATONNA — When family and friends gather on Sunday morning to say goodbye to Shannon Zwanziger, it’s doubtful that many will be wearing black.

More than likely, they will be wearing red. 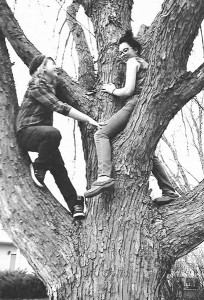 Best friends Shannon Zwanziger, left, and Sara Higgins climb a tree together. The girls met shortly after they moved to Owatonna, about three-and-a-half years ago. – Provided

“It was her favorite color,” said Shannon’s mother, Gwen Zwanziger.

For that reason, Gwen and her husband Terry have asked those attending the funeral service for the Owatonna High School senior to dress appropriately — in red.

Shannon Zwanziger, 17, died Tuesday morning after exhibiting what her family characterized as “flu-like symptoms.” The family said that Shannon had come home from school sick on Dec. 3, stayed home from school the rest of the week and grew increasingly worse throughout the weekend and early this week.

The services for Shannon will be held at 10 a.m. Sunday at the Warinski Chalet, the large warming house in Morehouse Park — a place that her parents said had become one of her favorite places in Owatonna, even though she had never skated before she moved here three-and-a-half years ago, just before her freshman year.

“Shannon spent so much time there,” her mother said.

At first they were certain that the chalet would be large enough to accommodate the family and a dozen or so students who might attend. But now they are hearing that there may be scores of students in attendance.

It would reflect the groundswell of support that Shannon’s family and friends have felt since her untimely death.

“I’m overwhelmed by the support of this community,” Gwen Zwanziger said.

In addition to the youcaring.com website, which has raised more than $5,000 for the Zwanziger family since Tuesday, the family was made aware of efforts by several of Shannon’s friends to raise money for the family at OHS and, the friends hope, to give Shannon another bit of recognition.

The friends — Sara Wiggins, TeJae Johnson, Sydney Brekke and Emily Dahlin, all fellow seniors — have started an effort to have Shannon named Snow Queen as part of the school’s annual Snow Week celebration. The idea originated with Emily.

“When I got the news of her passing this close to Snow Week, I thought, ‘She deserves this. She needs this,’” Emily said.

And, the girls said, they have been getting a lot of support from students in the school.

But that support doesn’t end there. The girls have organized fundraisers that also act as remembrances of their friend.

In one fundraiser, they are selling bracelets that recognize Shannon’s love for gaming. The bracelet will read, “Gamers don’t die, they respawn.” On the inside of the bracelet will be the name “Shannon Z” with her birthdate and her death date.

Then the girls are selling T-shirts, one that will say “In Memory of Shannon Zwanziger,” with her senior photo and a gaming symbol, and the other that will fit in with the girls’ campaign to have Shannon named Snow Queen posthumously.

“Shannon for Snow Queen,” it will read. A red T-shirt with black lettering, naturally.

Whatever funds they raise through their efforts, they plan to give to the Zwanziger family.

Details of the fundraisers and the girls’ efforts to elect Shannon can be found on a Facebook page the girls created this week, appropriately named “Shannon Zwanziger for OHS Snow Queen.”

Since Shannon’s death, the girls have been almost inseparable as they deal with their grief — sometimes laughing, which, they say, is fitting for Shannon, who had a great sense of humor.

“Our friendship was based on a lot of humor,” Sydney said.

At other times, they have worked on a memory book about Shannon — something they also plan to give to her family.

And there are memories — from TeJae’s friendship with Shannon that developed just this year over their mutual love of gaming to Emily’s remembering of how Shannon had a crush on a boy in one of their classes.

Then there was the lemon Starburst.

Shannon moved to Owatonna from Oregon right before her freshman year in high school, about the same time that Sara Wiggins and her family moved here from Rochester. They met at freshman orientation when Sara had a Starburst candy — a single yellow piece of candy — that she had no pocket in which to put the candy.

“So I asked her if she would hold it for me,” Sara said.

Even though Shannon forgot to give Sara back the Starburst.

“She texted me later that day and said, ‘You forgot your Starburst,’” Sara said.

And the friends laughed. It was, they said, just the kind of person that Shannon was.

They hold onto their memories of their friend, even as they campaign for her becoming Snow Queen. And they know there will be difficult times ahead, such as Sunday at the funeral service and later in the school year, when they receive their diplomas without their friend.

“Graduation is going to be the hardest thing,” said Sydney, “not being able to walk with her.”

“It’s going to be rough,” Emily echoed. “We’ll make it, though. We have each other.”