Funeral services for Philip Hansen, 89, of rural Albert Lea will be at 11 a.m. Wednesday at Central Freeborn Lutheran Church. The Rev. Matt Griggs will officiate. Burial will be at North Freeborn Cemetery. Visitation will be from 5 to 7 p.m. today at Bayview/Freeborn Funeral Home and one hour prior to the services at the church.  Online condolences are welcome at www.bayviewfuneral.com. 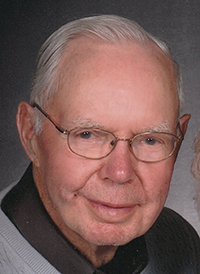 Philip died Saturday, Dec. 13, 2014, at Good Samaritan Society of Albert Lea, where he had lived the last year and a half.

Philip Hansen was born Aug. 31, 1925, on a farm near Clarks Grove, the son of Manford and Stella (Pederson) Hansen. Philip grew up on his family’s farm and graduated from Albert Lea High School.

On Oct. 27, 1947, he married Verdelle M. Demmer at Hartland Lutheran Church. Philip was a member of North Freeborn Lutheran Church until it closed, and then became a member of Central Freeborn. He belonged to the Elks Lodge, the Eagles Club and was an active member and officer of the church brotherhood. He was a board member of Clarks Grove Lumber Co., a Bath Township supervisor and a board member of Midwest Breeders. Philip enjoyed farming, traveling with his relatives, playing cards and listening to music. He played the keyboard by ear. Philip had a wonderful sense of humor that kept his family guessing. He loved being with his wife, whether traveling or just visiting with family and friends.

Philip was preceded in death by his parents; his sister, Norma Ingvaldson; five brothers-in-law and two sisters-in-law.