St. Nick’s wish is for ‘everyone to be happy’ 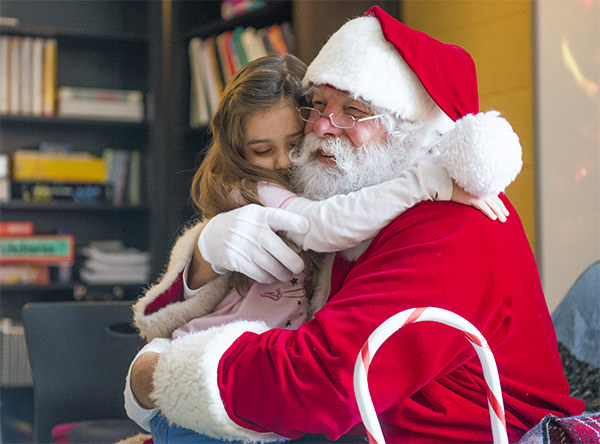 Myla Wright, 5, hugs Santa Claus before visiting with him Dec. 12 at Brookside Education Center. Santa came to visit as a part of the 2014 Winterim “Cookies and Cocoa with Santa” program. — Colleen Harrison/Albert Lea Tribune

Editor’s note: In the spirit of Christmas, the Tribune is making an exception to its rule of anonymity.

“I want a tractor,” the young boy tells Santa Claus.

“What color?” the jolly man asks.

His brother says, “I want a helicopter. A real one that I can fly.”

Santa inquires, “Have you done that before?”

The boy shakes his head no. Santa is confident, saying “But you’ll learn, won’t you?” 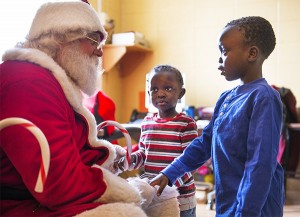 Brothers Khan Dup, 6, right, and Jeremiah Puk, 3, tell Santa Claus about the helicopter they hope to get for Christmas during a visit Dec. 12 at Brookside Education Center. — Colleen Harrison/Albert Lea Tribune

At this “Cookies and Cocoa with Santa,” hosted by Early Childhood Family Education, Mr. Claus is always patient, gently inviting in the shyer children and conversing with all of them. They approach him in jeans and T-shirts, glittery skirts and boots, bows in their hair, striped pants and polka-dotted tights, all with wishes in their hearts.

Together, Santa and the children go through the reindeers’ names: Dasher, Dancer, Prancer, Vixen, Comet, Cupid, Donner, Blitzen, and of course, Rudolph. They talk about the importance of Rudolph’s shiny red nose. Santa explains that Rudolph needs to train for Christmas Eve when he hauls all the toys to all those children all over the world.

As a girl recites her list, he asks, “If Santa can’t bring them all, is that OK?” He reminds the youngsters to leave him milk and cookies. He shows them his magical key that unlocks the homes without chimneys along with Rudolph’s bells.

He reveals a secret recipe for attracting reindeer: Mix oatmeal with sparkling sugar, sprinkle the mixture on the lawn and then his reindeer will spot it from the sky and know where to land.

“Have you been good?” he asks a girl. She nods her head seriously, saying she helped her mom clean. Santa approves, “So when you grow up you can do all the housecleaning for your mom.”

The children gather around a ho-ho-hoing Santa as instructor Mary Jo Volkman reads “Twas the Night Before Christmas.” Then the youngsters leave to make crafts and Santa describes his whirlwind 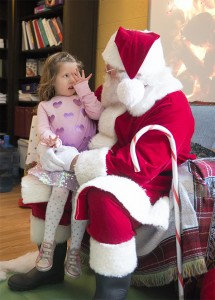 season to a reporter. In between supervising elves and training reindeers, Santa checks on children of all ages between Nov. 1 and Dec. 25, making about 100-plus appearances in the Albert Lea area alone.

The naughty and nice list isn’t the only one he constantly updates. During the holidays, Santa checks his schedule first thing every morning after nearly missing an event in the hubbub of Thanksgiving weekend. He tried using his cellphone to keep his schedule but couldn’t read it without his eyeglasses. With a paper list, he can make a copy for his wife, another way to prevent being a disappointing no-show.

After a breakfast of oatmeal, Santa checks on the North Pole and then visits people, volunteers at the Freeborn County Historical Society or American Legion, works around the house, checks on his cabin or feeds the birds. Around noon, he likes to relax at home by watching “Gun Smoke.” If his wife is home, she’ll make him a sandwich for lunch. Otherwise he’s on his own.

In in the evenings, Santa is often out and about. He likes to eat supper at the American Legion on Tuesdays and also Fridays when he’ll sing karaoke. Though he prefers Johnny Cash and Ray Stevens, he’s been known to sing “Grandma Got Ran Over by a Reindeer.”

If he can, Santa likes to relax in the evenings because his schedule is so busy. Getting suited up takes about 30 minutes, including the time to trim his beard and curl his mustache. Sometimes his appearances are 15 minutes apart.

Sometimes Santa goes to the grocery store incognito. He’s learned to keep candy canes in his pocket because children still recognize him. One time at a party, a boy asked, “Santa, why are you in disguise tonight?” Santa whispered back, “I didn’t want everyone to know that your grandma knew Santa Claus.” He’s also been known to pop into the Moose or Eagles club in Albert Lea in between events.

He was so busy this year that his family celebrated Christmas on Tuesday. In addition to all the elves, this Santa has three grown children — two sons and a daughter — and 11 grandchildren. They like to crank out homemade ice cream at their Christmas. 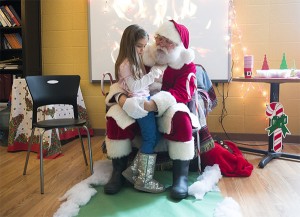 Today or shortly after, Santa will shave off his beard and go about his business quietly. He’s resolved to lose weight this year. “I love candy, I love to eat,” he said, and the holidays were no time for him to start a diet.

In June he likes to head to Canada to fish. That’s about when he’ll start growing his beard again. And making his lists.

His favorite thing about being Santa: “To see smiles on people’s faces. And the gratification. In rest homes, they see this red suit and their eyes light up. And to see the kids smile.”

His own wish for Christmas: “Just for everybody to be happy.”