Thelma Laurine (Hagen) Swanson was born near Lake Mills to parents Evan and Jane (Dokken) Hagen. She was the youngest of four girls and next to the youngest of all 12 children, and the last 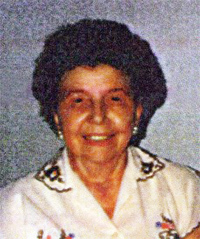 survivor of all the children.

She always loved animals, and her first job was working for a veterinarian. Throughout her life she always had pets.

She was united in marriage to Earling (Earl) Swanson March 28, 1937. They lived in Woden and Mason City before moving to the family homestead six miles east of Lake Mills, where they farmed together until the late 1950s when they moved to Albert Lea. There Earl was employed at Wilson & Co. and Thelma worked at Streater. At retirement they sold their home in Albert Lea, wintered in south Texas, lived in their motor home and returned to Iowa and Minnesota for the summer months.

The last few years, as her health declined, she stayed year-round near McAllen, Texas, to be closer to her daughter, Bonnie, and lived with her for a year before returning to Lake Mills where she became a resident of Lake Mills Care Center in July 2012.

Survivors include her children David (Joyce) Swanson of Glenville and Bonnie Close of Mission, Texas. She is also survived by four grandchildren, Kathy (Danny) Bakken, Connie (Howard) Honsey, Danny (Kim) Swanson and Lee (Maria) McMillan; along with seven great-grandchildren, two great-great-grandchildren, as well as many nieces and nephews.