Funeral services for Vera A. Bowman, 98, of Hollandale will be at 2 p.m. Sunday at the Bayview/Freeborn Funeral chapel. The Rev. David Schreiber will officiate. Interment will be in Hollandale Cemetery. Visitation will be from 4 to 6 p.m. Saturday at Bayview and one hour prior to the time of the service. Online condolences are welcome at www.bayviewfuneral.com. 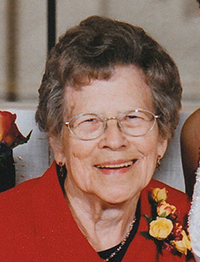 Vera Adelaide Bowman was born March 9, 1916, in Wynaet, Ill., the daughter of William and Martha (Duncan) Sons. She grew up and went to school in Illinois, living in various locations. Following high school Vera attended business school for a year and worked as a typesetter for Cable Publishing.

On June 16, 1936, Vera was united in marriage to Eugene R. Bowman. They farmed together and Vera continued to work for Cable. In the mid 1940s they moved to Minnesota, settling on a farm west of Hollandale. She was a former member of St. Paul’s Lutheran Church in Hollandale and a current member of United Church of God. She worked at Hollandale Marketing Association for several years and in her retirement worked for TCM Commodities until age 93. Vera enjoyed gardening, traveling, reading and discussing politics.

Vera was preceded in death by her parents; her husband, Eugene; a great-grandson, Markus; a brother; and three sisters.