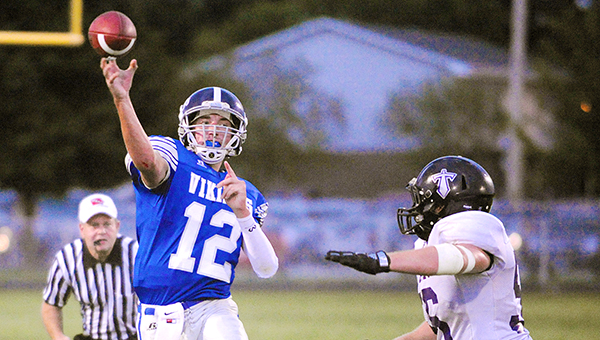 Whether he carried the ball between the tackles or picked on a defensive back in man-to-man coverage, Josh Einertson made an impact for the Northwood-Kensett football team.

Through the air, Einertson had the best touchdown-to-interception ratio in the area. He completed 42-of-85 passes for 522 yards with nine touchdowns and three interceptions.

“We talk all the time about making good decisions and taking care of the ball, and Josh does a great job,” said Northwood-Kensett coach Dave Capitani. “He would rarely force a pass and was able to make a lot of big plays with both his feet and his arm.”

Einertson is the Tribune’s All-Area football Player of the Year.

On the ground, Einertson was lethal as well. He gashed opponents for 871 yards and 11 touchdowns on 132 carries.

“His athleticism is his greatest quality,” Capitani said. “He’s fast and elusive with the ball.”

Einertson, a junior, accounted for 20 touchdowns and 1,393 yards of total offense, but he said his line deserves the accolades.

“I can’t thank them enough,” Einertson said. “They really don’t get enough credit for what they do. Without them, we wouldn’t get anywhere.”

Last year, Einertson shared a few snaps with Brandon Brockman but posted nearly identical numbers with 1,383 yards of total offense. To have an underclassman behind center is rare for the Vikings.

“Josh was the first sophomore to start since my first year as head coach when Brian Lease started for us,” Capitani said in his 26th year. “That team was 1-7.”

Not only has Einertson put up big numbers, he led Northwood-Kensett and a strong supporting cast to considerable success. The Vikings qualified for the second round of the 8-Man state playoffs in two consecutive years.

“He is a fine leader both on and off the field, which is essential for your quarterback,” Capitani said. “He is also very intelligent and has an outstanding grasp of the game.”

Einertson’s understanding of football stems from playing multiple positions. He started his tackle football career in the Vikings’ youth program in fifth grade, he said. He played running back his first year, was moved to tight end in sixth grade, then back to running back, and his first action as a signal caller was last year. He said Capitani and former Vikings quarterback and current assistant coach, Jordan Reindl, helped him with the transition.

“They’re all fantastic coaches,” Einertson said. “It starts with those guys. I have so much respect for them.”

Along with football in the fall, Einertson plays basketball in the winter and track in the spring.

He will return to the gridiron next year for his senior season. After graduating from high school, Einertson said he plans to major in education to become a history teacher.