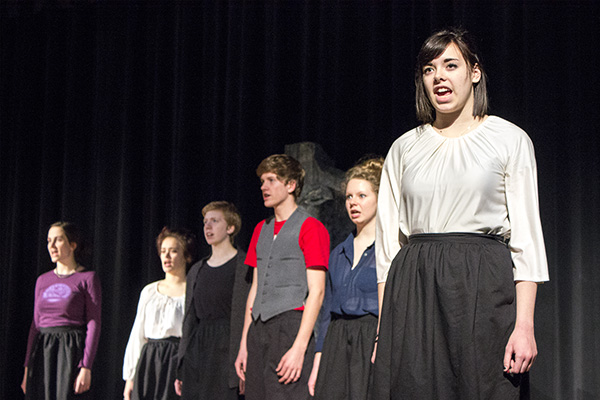 Bailey Ford, one of the narrators, and other cast members of “The Murder of Lidice” recite their final lines of the play on Tuesday during rehearsal at the Albert Lea High School auditorium. – Hannah Dillon/Albert Lea Tribune

The Albert Lea High School stage has seen many scenes in the past year, but up next is the seriousness of World War II.

Albert Lea High School’s one-act play will perform “The Murder of Lidice” at 7:30 p.m. Thursday in the high school auditorium as an open dress rehearsal for its competition on Friday.

“The Murder of Lidice” is based on a true story and is set in the Czechoslovakian village of Lidice, where it was believed that a man who assassinated one of Hitler’s officials is hiding.

The townspeople are innocent but Hitler wanted to make an example of the town, so he ordered all the men to be killed on June 10, 1942. Many of the women were killed as well, and any survivors were sent to concentration camps.

After the people were killed or sent away, Lidice was burned to the ground. Director Lilah Aas said the only thing remaining at the town’s original site is a memorial. 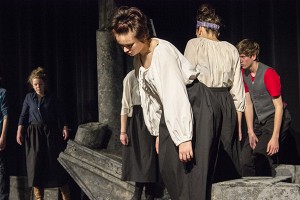 Quinn Andersen, front, and other students in “The Murder of Lidice,” the one-act play at Albert Lea High School, rise from acting dead to finish the play. – Hannah Dillon/Albert Lea Tribune

Aas, who has been directing the one-act play for 11 years since she retired, said she saw this play years ago and was interested in having the one-act play students do it this year. She said she tries to do something a little different each year, whether it be comedies, tragedies and everything in between.

However, Aas said she usually picks serious plays as she likes to have the students perform something “with meat on it,” she said.

The students started practicing at the beginning of the month after returning from winter break. However, bad weather canceled some of the practices and students have been out sick.

Despite having less practice than normal and being saddled with a heavy play, most of the students said they enjoyed the play itself.

However, Isabel Ehrhardt, who plays both a narrator and Beyata, said the play is “draining” and she is exhausted after practice.

The play is still somewhat challenging to the students, especially because of the fact that it is all in verse. 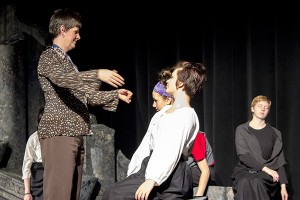 Vocal music teacher Diane Heaney helps actors in the one-act play with a scene where they appear to rise from the dead. – Hannah Dillon/Albert Lea Tribune

Students in the one-act play will perform “The Murder of Lidice” at Prior Lake High School at 4:20 p.m. on Friday for competition. Aas said the public is welcome to attend the play, and there is no charge.

What: “The Murder of Lidice” one-act play open dress rehearsal