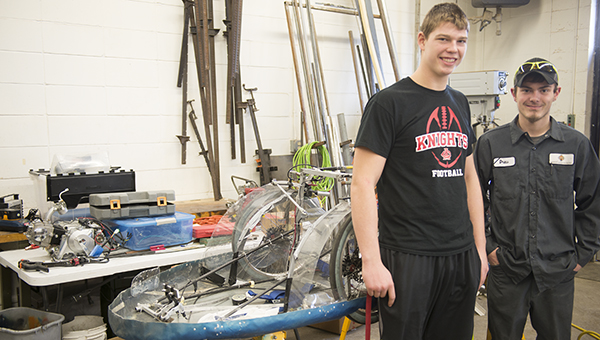 Alden-Conger junior Jacob Wallin, left, and senior Drew Folie in December went to Detroit as a part of the school’s Super Mileage team. Both are interested in mechanical engineering and participate in the Shell Eco-marathon Challenge. – Colleen Harrison/Albert Lea Tribune

‘Get out there and do it’

ALDEN — Two Alden-Conger students traded their hometown for the Motor City for a few days this past December.

Junior Jacob Wallin and senior Drew Folie were selected out of about 20 students in the nation to attend an all-expense paid trip to Detroit Dec. 14 through 16, courtesy of Shell Eco-marathon Americas. Shell Eco-marathon is an international competition to design, build and drive the most fuel-efficient car.

Both Wallin and Folie went as a part of Alden-Conger’s Super Mileage team, along with the team’s adviser and Alden-Conger physics and chemistry teacher David Bosma. Super Mileage is an after school activity that anyone with an interest in mechanical engineering between seventh and 12th grade can join. Bosma, who has been teaching at Alden-Conger for about 17 years, said the program has been in place for about 16 years.

Wallin, 16, has been involved with the team since he was in seventh grade. He said he grew up seeing the program develop and knew he wanted to be a part of it one day.

Folie, 18, said he joined the team in eighth grade after he and his family moved to the area from Lake Mills. He said he was introduced to the team by some of his friends and quickly became interested.

The team meets every other Sunday, and each team member has to log 60 hours over the span of a year. The team designs and builds cars and teaches younger members about motors, carburetors and other mechanical aspects while helping them build basic skills. Both Wallin and Folie said the team is working on four different cars right now, some of which are housed at different local shops that sponsor the team since the high school shop doesn’t have the space for all four cars. They said a captain is assigned to each car, but that the workload is intermixed with every team member working on each car at some point during the process.

For both Wallin and Folie, the best part about being on the Super Mileage team is the experience that comes with it. Wallin especially noted the fact that the team literally builds cars “from scratch.”

“We get to learn from our failures,” he said.

Folie added that he liked being able to physically see how to work out problems.

“It’s nice to see all your hard work go into a success,” he said.

When it came to the more challenging aspects of building and designing the cars, both said that collaboration can be difficult at times. Wallin said that each member usually has their own idea, and Folie said that it can sometimes be hard to completely collaborate and compromise everyone’s ideas down to one set design.

Both had only good things to say about their recent trip to Detroit. They said they were able to tour both the Ford and Chrysler plants, and got to see what all goes into the process of making a car — from designing to building — in a factory setting. Both students said they liked being able to see how the whole process worked and how the companies made the process more efficient.

Wallin and Folie are both looking to go into mechanical engineering following high school. Folie will graduate from Alden-Conger in May. He said he has been taking enough Postsecondary Enrollment Options courses that he only has one more year left at Riverland Community College before he has a diploma in diesel technology. Wallin said he has been taking general PSEO courses and is looking into different colleges and programs. Both agreed that they wanted to gain experience in the field as well as an education.

“Being behind a desk doesn’t always work,” said Folie. “You have to actually get out there and do it.”

Interesting fact: Apart from working on cars, both enjoy snowmobiling and hanging out with friends. Folie also likes to ice fish.