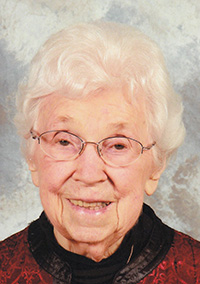 Alice (Ravenhorst) Muilenburg was born April 6, 1919, in Pease to John and Willamina (Scheffer) Ravenhorst. The family moved to Hollandale when she was 9.

She married Cornelius Muilenburg April 24, 1940. Alice worked at Albert Lea Hotel and as a housekeeper for a number of families in Hollandale. Alice partnered with Cornie, building the family farm and when the children were grown she worked as a nurse’s aid at Good Samaritan Society. Alice was a prayer warrior and had a servant’s heart; she encouraged and blessed many with her cards, baked goods and meals. Many hours were spent volunteering at the Christian school and Reformed Church. The quilting ministry was a particular favorite. Alice also enjoyed the homemakers club as well as ceramics. Alice and Cornie had four children, Ken, Joan, Don and Bob. Her love for her family was exceeded only by her love for her Lord.

Alice’s legacy is a family that loves her deeply and will dearly miss her; she has finished the race set before her. She would pray for you today to fix your eyes on Jesus remaining faithful to her Lord and Savior.

In lieu of flowers, memorials are preferred to Hollandale Reformed Church or Hollandale Christian School.