Funeral services for Barbara Joy Botten, 88, of Albert Lea will be at 2 p.m. Saturday at United Methodist Church. The Rev. Tom Biatek will officiate. Interment will be in Graceland Cemetery. Visitation will be one hour prior to the service at the church on Saturday. Bayview/Freeborn Funeral Home is assisting the family. Online condolences are welcome at www.bayviewfuneral.com. 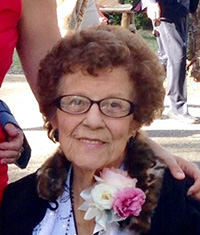 Barbara was born in St. Paul July 9, 1926, to Hobert and Alberta (Paley) Mckay. During her high school years she participated in choral and theater programs and numerous clubs. She graduated with honors from University High School in 1944. Barbara started her college years at the Conservatory of Music in Chicago. After two years she transferred to the University of Minnesota where she received a bachelor’s degree in music education. She taught music lessons in the St. Paul Public Schools system and also performed in recitals at the American Conservatory of Music, Macalester Presbyterian Church and Christ Episcopal Church as lead soprano soloist. She also sang for the Civic Opera Association, where she received recognition for her outstanding performances and commitment.

She met her lifelong husband, Harvey, on a blind date. It was love at first sight and they married a year later Nov. 21, 1951, and had 49 beautiful years together. Barbara, Harvey and daughter, Anne, left St. Paul and journeyed to Albert Lea to start an insurance business with State Farm. One year later, twins Susan and Steven were born. In addition to supporting Harvey’s business and political aspirations, Barbara enjoyed committee and volunteer work. She was choir director, Sunday school teacher, elder and president of the local Westminster Association at First Presbyterian Church in Albert Lea. Barbara was a member of the United Methodist Church. She was a member of AAUW and drove inspirations and programs for children’s plays and other fundraising events. She was on numerous committees for the Naeve Hospital Association and co-chaired the planning and launch of the Candy Striper program. She was a member of Jaycee Jaynes and also a member of the Albert Lea civic choral group. She supported the local PTO, serving on numerous committees and she served on the board at Thorne Crest Retirement Community. She also loved to entertain.

Barbara was an active member of the Women’s’ Republican Club and spearheaded many local elections and fundraising events as well as Harvey’s political journey. She was elected to the state convention as first vice chairman and was a delegate for many years. Barbara enjoyed time with her friends in Albert Lea, playing bridge, attending book clubs, celebrating birthdays and entertaining. For quiet time and reflection she always had a sewing project on hand. Gardening was a favorite — she was so proud of her roses.

Her family will remember the family outings in Bemidji, Florida, Arizona and Bozeman, hunting, fishing, shelling and exploring the beauty of nature and life. Barbara and Harvey loved to travel together. Barbara’s special trip was to Scotland where she enjoyed exploring her McKay heritage and feeling the beauty of her family roots.

Barbara was such a dear sister, wife, mother and grandmother. She will be missed by brother, John McKay, of Salt Lake City; children Anne Botten of Albert Lea, Steven and wife, Linda, (Mehrmann) Botten of Oxnard, California, who have passed, and Susan Botten Mitchell and husband, David Mitchell, of St.Paul; her grandchildren — who called her Nana — Stephanie (Botten) and husband, Joe Merino, of Oxnard, Melissa Botten of Long Beach, California, Lindsey (Kracum) and husband, Ryan Mineburg, of Redondo Beach California, Christopher Botten of Santa Monica, California, and Matthew Kracum of Brooklyn, New York; great-grandchildren Jackson and Jossilyn Merino, Linda and Skye Hickok — daughters of Melissa Botten; and many nieces, nephews and friends.

Barbara was classy, elegant, spirited, loving and kind, always singing a song or humming a tune. May the Lord bless her and all the lives she touched. Those who knew her will miss her forever.

Barbara’s family sends their sincere heartfelt gratitude to her caregivers at Thorne Crest Retirement Community. Their love and attention around the clock were so truly appreciated.