A memorial service for Bernadine L. Cornick will be at 2 p.m. Saturday at St. John’s Lutheran Community chapel. The Rev. Gary Pilcher will officiate. Visitation will be held one hour prior to the service. 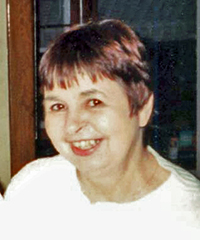 Bernadine was born July 6, 1940, in Albert Lea to Roy and Thelma (Fair) Lincoln. She grew up in Albert Lea where she attended school.

She began her working career as a sales clerk at Spurgeon’s. She worked there for over 20 years. Later in her career she was also a housekeeper at Days Inn Hotel in Albert Lea.

Bernie was an outgoing person. She liked to dance, read, collect frog ornaments and get together with the “Hen House Gang” for jigsaw puzzles every Wednesday. She enjoyed caring for her two dogs, J.J. and Gypsy. All of the family could not wait until their birthday arrived, because they knew Bernie would make them her delightful fudge treats. Bernie loved her family. She especially liked her time spent with all of her grandchildren, and cherished each moment she had with them.

She is preceded in death by her parents; a sister, Janice Lenzen; a daughter in-law, Darla Clark; and a grand-nephew, Josh Pilcher.

The family would like to send a special thank you to all of the loving people that cared for her including Mayo Clinic Cancer Center, St. John’s Lutheran Community and Mayo Clinic Home Health and Hospice.