Big, bold and before the audience 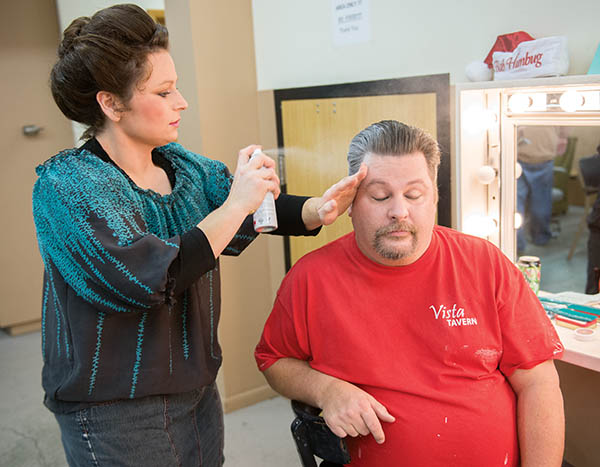 What happens in the basement goes on the stage …

Popular hair and makeup styles have been getting bigger in recent years — big lips, big lashes, big hair. However, nothing beats the boldness of hair and makeup for the stage. 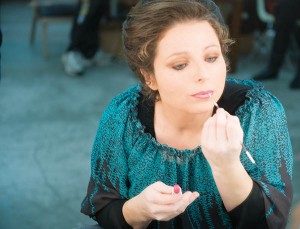 Albert Lea is no exception. Albert Lea Community Theatre actors who go on stage need to have just-right hair and makeup. They often get ideas from the director or a costumer, but applying hair and makeup is done by the actors themselves, down in the basement at the Marion Ross Performing Arts Center in rooms below the stage.

Kristan Dye said she prays for roles where she wears a wig. She likes that wigs can be styled in advance, and it’s easier to slip wigs on and off during costume changes.

Dye — an actress who has appeared in many ACT productions such as “Winnie the Pooh,” “Sherlock Holmes: The Final Adventure,” “Gypsy,” “The Haunting of Hill House” and “Lend Me a Tenor,” among others — most recently acted in ACT’s production of “A Dickens’ Christmas Carol: A Traveling Travesty in Two Tumultuous Acts” as Mrs. Bettina Salisbury.

In “Christmas Carol,” Dye gets to wear a wig. However, Stephanie Nelson — who plays Mrs. Cordelia ffoliet-ffolkes ffortescue Woods — uses her natural hair for her character’s coiffure.

Nelson’s long locks are twisted up into a Victorian-style bun for this performance. It takes Nelson one hour and a lot of ratting and hairspray to get her hair to stay in place, but she said it doesn’t budge for the duration of the play.

Due to the length of Nelson’s hair, she said she can use it in a variety of ways to achieve the hairstyle she wants for a character. The time it takes to get ready for the stage varies from character to character. Nelson takes an hour to do her hair and a half hour to do her makeup, while actor Scott Bryant takes no time at all to get his hair ready for this production. 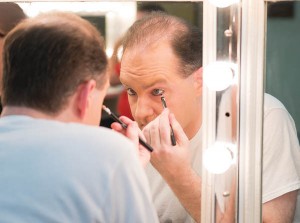 Scott Bryant applies makeup before performing in the opening night of “A Dickens’ Christmas Carol: A Traveling Travesty in Two Tumultuous Acts” as Teddy Shub.

Bryant, who played Teddy Shub, simply has to put on makeup. Actors like Jay Paul, however, had to do a bit more for this production — he played Sir Selsdon Piddock and needed to spray his dark hair gray.

The makeup used on stage is much heavier than what is used for daily wear. The foundation that ACT uses in its productions is Ben Nye brand, and is thick and opaque. Dye said it “wreaks havoc” on her skin after a few weeks, and actor Kristi White — who played Dame Rowena Middleton-Lewis — said her hair is ruined by the end of a show’s run.

Another makeup product used by the actors is a Ben Nye white powder that keeps makeup in place, even through sweating. While Dye doesn’t use this product, she said many of the men use it.

For this production of “A Dickens’ Christmas Carol,” the makeup is meant to be more natural, as it is set in the Victorian era. Besides foundation, however, the actors, men and women alike, wear eyeliner — it helps define the eyes from far away. 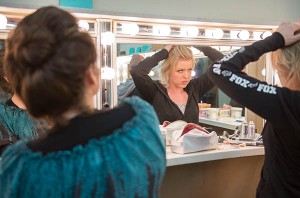 Kristi White gets into character before performing in the opening night of “A Dickens’ Christmas Carol: A Traveling Travesty in Two Tumultuous Acts” as Dame Rowena Middleton-Lewis.

In fact, most stage makeup looks much too heavy and gaudy close up, director Brian Mattson said. What might look like dark lines on the forehead and sides of the face end up looking like wrinkles from far away.

It’s not all about the makeup either. Lighting can play a big part in how a character ends up looking. Putting a green light on an actor makes them look ghostly while putting on pale makeup and standing in front of a yellow light makes them look sickly.

Also, just the fact that there are bright lights on stage masks the thickness of the makeup, except for maybe people in the front row, Mattson said.

One makeup rule that still applies to the stage, however, is not too much blush. Dye said she once had to help an actor put on his blush because he originally put on too much, leaving his cheeks bright red. 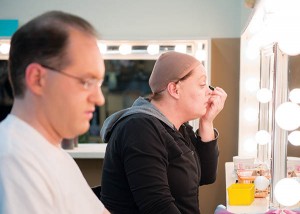 Once, Mattson, as an actor, went to the wings for a costume change and had to reapply foundation, but used blush instead. Mattson was left wondering why the actor’s face was suddenly so red.

While actors have hours to get ready before a play, costume changes usually happen in the blink of an eye. During a show backstage or downstairs, stage managers assist the actors with costume, hair and makeup changes.

Each actor has his or her own area with all of their costumes and wigs laid out. Rule of the theater: Do not touch or move backstage items unless they is yours. Stage curtains work as makeshift dressing rooms.

Jason Howland — who plays Mr. Elyot Crummels — has a litany of costume changes, all of which must take a minute or less.

A stage manager helps him change his makeup, including gluing on sideburns for one part then ripping them off and putting on red makeup to make them appear ripped off for another.

Howland said this play has a lot of costume changes for the length of it, and usually involves some hectic running around the stage.

While stage managers routinely help with costume changes, it’s less often that a professional will come to do hair and makeup. Sometimes Dye has even brought her own personal stylist to get her ready for a show.

How do they take off all that makeup and hair product?

Each actor has his or her own methods, but baby wipes, makeup wipes or Noxzema usually do the trick. Paul said his colored hair spray washes out in the shower, and Bryant said he just scrubs his makeup off with a damp washcloth.

As the actors do their own hair and makeup, they get the chance to create their character not just in their acting but visually as well. Dye said makeup and hair really help the character come to life.

“You get to be as old as you are and play dress up,” she said.