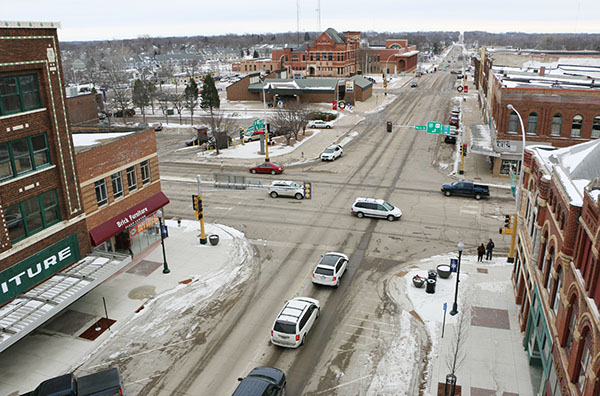 The intersection of Broadway and Main Street as it presently appears with four traffic lanes on South Broadway. – Provided

Expert says route is too big; bad for biz

International transportation expert Dan Burden encouraged Albert Lea residents on Monday to take advantage of a mill and overlay project slated for this summer on South Broadway and to lobby the state for what he calls a “road diet.”

Burden, who has been in Albert Lea since Friday conducting focus group meetings, walking audits and other research, said he thinks traffic on South Broadway does not warrant having four traffic lanes. 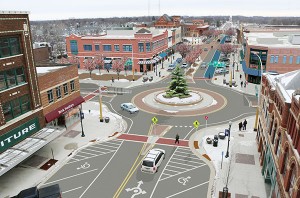 This rendering by a photo morphologist shows how the intersection of Broadway and Main Street could look if some changes are implemented, including a roundabout, two lanes of traffic with a turn lane in the center, angled parking on one side and bike lanes to name a few of the amenities. – Provided

“We’re recommending the removal of two lanes completely,” he said.

Burden said traffic lanes can carry 1,800 vehicles per hour, which, multiplying that by the busy times in the day, equates to 18,000 vehicles a day. Two lanes would carry 36,000.

South Broadway south of Main Street is also U.S. Highway 65, which is maintained by the Minnesota Department of Transportation. MnDOT traffic volume maps from 2013 show it had about 7,200 cars per day, with 7,600 immediately north of the junction with South Margaretha Avenue. On the stretch between Margaretha and Interstate 35, it had 4,900.

Burden estimated traffic near the Freeborn County Courthouse to be at most 9,000 a day.

“That’s why we feel comfortable making these recommendations,” he said.

With the removal of two traffic lanes could come the addition of angled or parallel parking on both sides of the street, along with bike lanes, Burden said. There would be a turn lane down the center.

With the creation of more parking on the street, there would be less strain on the existing parking lots, and the land those lots are on might eventually be able to be sold.

The same could be true on Main Street, particularly from Newton Avenue to Washington Avenue, he said. This would create more on-street parking for businesses such as The Color Wheel.

Burden was in town with the Blue Zones Project, a partnership between Healthways Inc. and Blue Zones LLC. Throughout the course of the project, national experts are drawing on the city’s prior success to develop a blueprint for making permanent environmental, social and policy changes that lead to healthier behaviors and improved wellness. 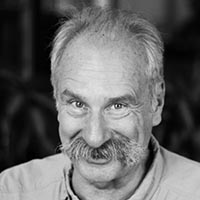 Burden said initial changes for Broadway could come simply by differences in paint striping after the state’s mill and overlay.

If Albert Lea was to only implement one roundabout, he suggested the one at Broadway and Main Street.

“If you were to only build one we think this would be your smartest investment,” he said.

He showed a rendering of what Broadway would look like with a roundabout at the road’s intersection with Main Street and further development to the south.

He said roundabouts reduce injury crashes by 90 percent and can move 30 percent more traffic. He noted most semis, except for the over-extended ones, could travel through them without any problem. The large semis could bypass through town on the Front Street extension.

He said an engineer tested the idea for the roundabouts and found they would be able to fit with minimal disruptions.

A few people in attendance at the presentation voiced their support for roundabouts.

Jennfier Vogt-Erickson said she was almost struck by a car at the intersection of Garfield Avenue and Main Street, so she would support one there, too.

Another area he discussed was the roadway in front of the Freeborn County Courthouse. He said this part of the road is 67 feet wide and takes 20 seconds to cross for people in good health.

In addition to reducing the traffic lanes, he suggested a raised intersection in front of the courthouse to help with speed and traffic. He also suggested turning Pearl Street into a one-way street and implementing angled parking on it.

Other suggestions he gave were adding tree wells and rain gardens, curb extensions and raised medians.

He said the city has roughly 50 days to try to get the initial changes submitted to the Minnesota Department of Transportation. That’s the time before the mill and overlay goes out for bids.

“My thinking, go for the gold,” he said.

Burden gave a condensed version of the presentation to the council later that night.

Fifth Ward Councilor Larry Anderson said he was pleased with several of the proposals presented and said he appreciated the time and effort of Burden and other Blue Zones staff members preparing them.

Samantha Thomas, built environment manager with Blue Zones, encouraged people who liked the proposals to write letters to the MnDOT district engineer to show their support.

“It’s important to hear from the community that you’re in support of it,” she said.

Vehicles per day in and around Albert Lea in 2013

Broadway between Main and Margaretha: 7,200

East Main between Broadway and Marshall: 10,100

East Main between Marshall and Stevens: 15,200

East Main between Stevens and Prospect: 12,700

West Main between Broadway and First: 8,700

Bridge between Hammer and Hershey: 9,400