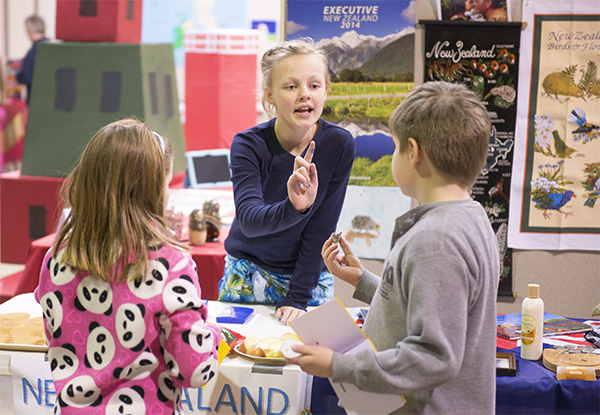 HOLLANDALE — Hollandale got an international taste on Thursday with Hollandale Christian School’s Festival of Nations. 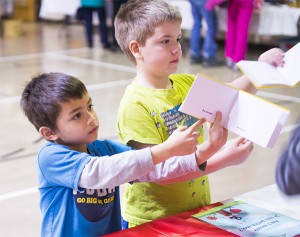 Students ask to have their passports stamped at the Festival of Nations Thursday at Hollandale Christian School. — Colleen Harrison/Albert Lea Tribune

McCarthy said that every other year the fifth- and sixth-grade students at Hollandale Christian School pick a country to research before summer break. Once they get back to school they extensively research their country on different topics during their world history unit, resulting in a 12-page research paper.

Over the summer, McCarthy said the students have the task of gathering items or artifacts from their countries to display at their booths during Festival of Nations.

After their research, McCarthy said students are ready for the Festival of Nations, saying it is a fun day for them.

Some students pick countries their parents have visited or countries where their ancestors came from. However, McCarthy said the students have the freedom to pick whatever country they want. 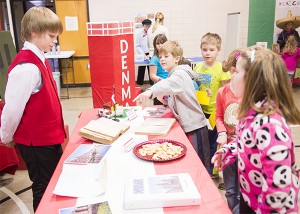 McCarthy draws sticks to see who gets to pick a country first and it’s first-come, first-serve for picking countries.

There were 18 booths at this year’s Festival of Nations ranging from France to Japan to the Gambia, among others.

Students must have their report, food item and artifacts at their booth, and they must be dressed in traditional clothes from their country. They also must greet visitors to their booth in their country’s language.

Visitors could go through the Festival of Nations from 1 to 2 p.m. and 6:30 to 7:30 p.m. Visitors could pick up a passport before entering the gym at Hollandale Christian School and collect stamps from each booth.

McCarthy said usually 100 to 200 visitors come to the Festival of Nations, and Hollandale Christian School students could come through between 1 and 2 p.m.

Emberson said she learned a lot of things from her project, such as how the biggest ferris wheel in the world is in London. 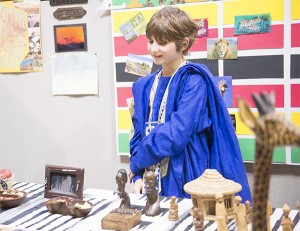 Jon De Haan, a fifth-grader at Hollandale Christian School, did a presentation on Zimbabwe for the school’s Festival of Nations. He said he chose that country because his mother went on a mission trip there, and that he himself was born in Kenya, a neighboring country. — Colleen Harrison/Albert Lea Tribune

She had an assortment of collectible spoons and plates at her booth that her great-grandmother got in the United Kingdom, as well as a plaid cloth from Scotland.

Emberson also had an old magazine from the United Kingdom from the 1800s that she found in a thrift shop.

At her booth, she was serving both plain and cinnamon crumpets, a griddle cake that resembles an English muffin.

Emma Clausman, a sixth-grader, did her project on Japan. She knows people who have been to Japan, and she has also been there herself. Clausman said she is also interested in Japan in general.

Some of the artifacts she had on her table included a fan, chopsticks, games and Japanese candy. One of the more striking things at her booth was a large Japanese doll that her grandparents bought her.

One interesting fact that Clausman said she learned is that New Year’s is one of the biggest celebrations in Japan and the celebrations last for three days.

The food she served at her booth was Japanese honey bread that she made herself, and she wore a kimono.

While some of the students picked countries they had visited or were interested in, fifth-grader Jon De Haan picked Zimbabwe, a country his parents had been missionaries in.

While he picked Zimbabwe, De Haan and his twin brother, James, were born in Kenya. They couldn’t do their project on Kenya, however, as their older sibling had done it before.

De Haan had a wide array of artifacts at his booth, including pictures, Zimbabwean money and wooden figures that his parents had collected during their time in the country.

One interesting thing that De Haan learned about Zimbabwe is how low the life expectancy is there — he said the expectancy for men is 37 years and the women is 34.

De Haan said this is because of a lot of illness along with the main hospital in Zimbabwe getting shut down.

The food that De Haan served at his booth was dried fruit, which he said is a common snack in Zimbabwe.

Hollandale Christian School in Hollandale has been providing Christian education since 1950.