Editorial: Have you built something amazing in ‘Minecraft’? 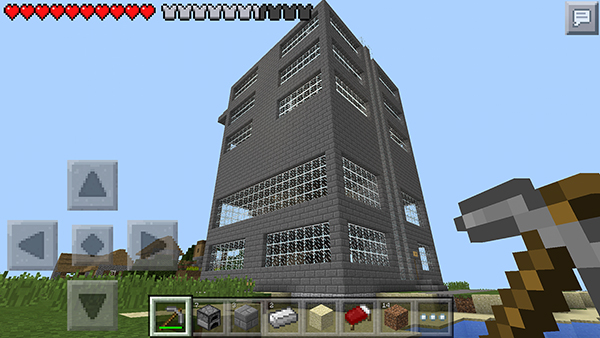 This is a skyscraper Tim Engstrom and his 7-year-old son, Forrest, made on a version of “Minecraft” for cellphones and e-tablets called “Pocket Edition.” Inside is an elevator, an art gallery, hotel, lobby, workplace offices, rail station and a luxury suite.

The Albert Lea Tribune would like to speak with children — or grown-ups — in the local area who play the video game “Minecraft.” We want to share images of their amazing creations and tell readers why players love the game.

“Minecraft” is a video game launched in May 2009 for personal computers. It surpassed 1 million sales by January 2011. As of last summer, 54 million copies have been sold. It is considered the third-best selling video game of all time. Only “Tetris” and “Wii Sports” have sold more copies.

It is a game where the player can attempt to scratch out an existence surviving monster attacks while mining for supplies and farming for food or where the player can turn off the monsters and have endless supplies to be wildly creative. The game has become the Lego blocks of the video world. There are some other games like it, but none surpasses the original.

These days, “Minecraft” is available on all kinds of platforms: PC, Macintosh, iOS, Android, Playstation, Xbox and others. People play it on their phones, their desktop computers and their video game consoles. Some players keep to themselves. Others join large online communities.

The game keeps updating, too. The recent version even allows players ride horses as a faster way to get around.

We want to feature “Minecraft” builders in our Progress 2015 edition. We want to meet local people big and small who have made neat things with the game. We want to share these creations with the community at-large. Have you built a castle? A skyscraper? A bridge? A fortress? A city? A stylish house? A complete railroad? A gigantic roller coaster? Are you an architectural wonder? Even if you made a simple hut, we would be glad to feature it. We welcome all crafters.

And we wonder if there is an Albert Lea “Minecraft” community. Wouldn’t it be cool to play the game with the kid down the street rather than people five states over? How can this newspaper bring people together, even if they are in a virtual world?

If you wish to share your creations or knowledge of the game, contact Editor Tim Engstrom in the coming week. He is writing this story and hopes to have it wrapped up by Jan. 20. He can be reached at 507-379-3433 or through his email tim.engstrom@albertleatribune.com. Please put “Minecraft” in the subject line.