Memorial services for Elvina “Bonnie” Elizabeth Linder of Albert Lea will be at 10 a.m. Saturday at Grace Lutheran Church. The Rev. Janet White and the Rev. Kent Otterman will officiate. Interment 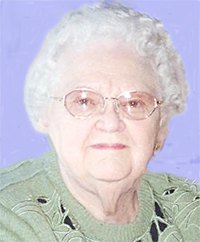 will be in Zion Cemetery, Mansfield Township. Friends may visit with family one hour before services at the church. Bonnerup Funeral Service is assisting the family.

Bonnie died on Saturday, Dec. 20, 2014, at the Good Samaritan Society in Albert Lea. She was 97. She was born on Sept. 19, 1917, in Kiester Township, the daughter of Edwin and Selma (Peterson) Trytten. She attended the gravel pit-country school in Kiester Township through eighth grade. After her schooling Bonnie worked at various farm homes as a housekeeper.

She married Howard C. Christianson in 1937; they were later divorced. To this union Carol Ann and Roger Allen were born.

In the 1950s Bonnie operated the Hyde Grill, a coffee shop in the Hyde building in Albert Lea.

In 1960, she bought the Skyline Supper Club in Albert Lea and operated that business until her retirement in 1978. She had married Chuck Linder in 1973; they later divorced.

Bonnie was an Albert Lea area resident most of her life and was very active in community activities which included being a member of Grace Lutheran Church, V.F.W. Auxiliary, American Legion Auxiliary, Eagles Auxiliary, Moose family fraternity, Albert Lea Senior Citizens and a life member of the Naeve Hospital Auxiliary.

Bonnie was very proud of her family and loved spending time with them and her friends. She was always up for a fun time. She enjoyed baking cookies and bread, gardening, fishing, going to the casino and watching the Minnesota Twins. The times she spent at the cabin in Nevis were always special.

She loved to travel, having made the trips to Las Vegas more than 20 times where she enjoyed seeing shows, especially Dean Martin, Frank Sinatra and Sammy Davis Jr. She enjoyed her years of bowling leagues and card clubs and anything that gave her a chance to visit with everyone.

She was preceded in death by her parents; her children Roger Allen Christianson and Carol and her husband James E. Bye; brothers Gilman and Arthur Trytten; a sister, Amy Underwood; sister-in-law, Doris Trytten; brother-in-law, James Underwood; and nephews Kevin and Bradley Trytten.

Memorials are requested to Grace Lutheran Church in lieu of flowers.