Esther Marie Obermeyer, 90, of Walters died Thursday, Jan. 8, 2015, at Parkview Care Center in Wells where she had been a resident since March of 2008. Funeral services will be held at 11 a.m. 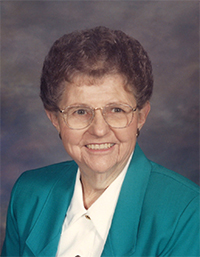 Wednesday at United Lutheran Church in Walters with the Rev. Don Rose officiating. Visitation will be Tuesday from 3:30 to 6:30 p.m. at Bruss-Heitner Funeral Home in Wells. Visitation will continue one hour prior to the funeral on Wednesday at the church. Interment will be in the United Lutheran Cemetery in rural Walters. Please see www.brussheitner.com to leave online condolences. Bruss-Heitner Funeral Home of Wells is assisting the family.

Esther Marie was born June 5, 1924, the daughter of Henry and Eda (Martin) Obermeyer, near Walters. She was baptized and confirmed at St. John Lutheran Church of Walters. She was a lifelong member of that church and later United Lutheran Church of Walters. She lived her entire life in the Walters area. Esther attended the Hintz country school through the eighth grade. Esther worked as a bookkeeper and candled eggs for the Walters Creamery. Later, she worked for Williamson’s Soil Service in Walters.

Esther was active in many organizations of the church, including teaching Sunday school, confirmation and bible study, ELCW, circles, making quilts and many other activities of the church. She was a member of the Walters Senior Citizens and served on the Faribault County Senior Citizens Board. She was also the librarian for the Walters Library for many years. Esther loved to entertain her family and friends and would always provide a delicious meal or tasty treats. This was always followed by “a game or two of cards.” She was an excellent seamstress and loved to do handiwork of any kind.