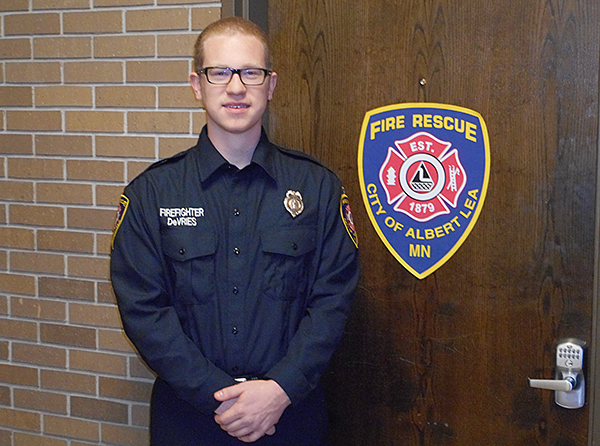 Albert Lea firefighter Jordan DeVries stands in the new uniforms of the Albert Lea Fire Department next to an image of the new patch for the department on the door of the Fire Department living quarters at City Hall. – Provided

The Albert Lea Fire Department has a new look.

After several years of wearing polyester-style gray uniforms while conducting inspections and other duties in the public, the department now has new navy blue uniforms up to National Fire Protection Association standards.

The uniforms, made of Nomex, a flame-resistant material, feature each firefighter’s name embroidered on the shirt, with an updated patch on each arm. Each firefighter wears a badge — which varies depending on rank — as in years past.

The patch features a Maltese Cross with the city’s logo in the center, along with the department’s origination date, a fire hydrant and a ladder.

Instead of saying Fire Department across the top, the patch now says Fire Rescue, to illustrate the many rescue efforts the department takes part in, said Deputy Fire Chief Jeff Laskowske.

Laskowske said the department has been considering the change for quite some time and noted he thinks the changes better represent the department’s expanding responsibilities and service to the community.

“Our call volume is going down on the fire side, but increasing on everything else we do,” he said.

In addition to firefighting, the firefighters conduct vehicle extrications, along with rope, confined space and water rescues. They assist Gold Cross Ambulance crews and the Albert Lea Police Department during emergency medical calls.

Laskowske said because the new uniforms are flame resistant, they can be worn underneath firefighting gear if necessary.