Freitag sworn in as sheriff, announces his goals 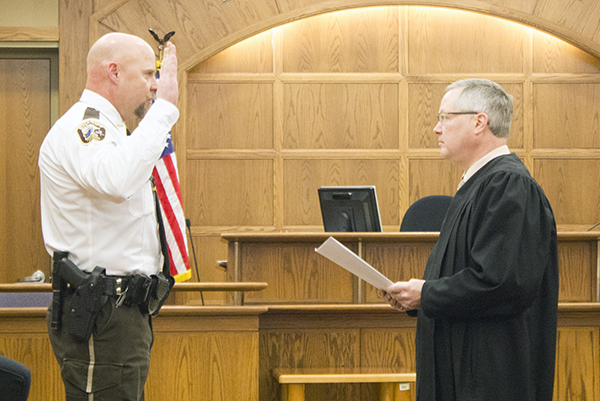 Freeborn County’s new sheriff laid out his goals for the next four years on Monday after he was sworn into office.

After a brief ceremony with other elected officials at the Freeborn County Courthouse, Kurt Freitag said he is starting his term by filling vacancies in the department, and he hopes to unify his deputies after a contentious election.

“There is a degree of healing that needs to be going on,” said Freitag, 48, who defeated former Sheriff Bob Kindler in the November race.

He said it is his goal to win over even the people who opposed him in the election, and he hopes to do so through what he described as “positive leadership,” good communication and using the strengths of each member to their fullest.

“I think in time even the most reluctant will come around,” he said.

Freitag announced at the end of November he has selected county civil process deputy Todd Earl to be his chief deputy and at the end of December announced he has promoted Ryan Shea from patrol sergeant to detective. During the Freeborn County commissioners’ meeting today, he planned to ask the board to vote on a new jail administrator. Then, he will find replacements for any deputies who were promoted.

He noted his biggest goals have been to increase patrol presence in the department and to improve investigations.

“That’s been an enlightening experience,” he said.

The department is preparing for new equipment, including new squad car cameras, and he hopes to re-establish ties with the state Department of Corrections to see if Freeborn County can take on the Sentence to Service personnel.

He said in the next few days he plans to call Immigrations and Customs Enforcement officials to tell them about the change in leadership. He would like to expand the ICE agreement and bring even more detainees to the jail.

Freitag was one of more than a handful of elected officials to be officially sworn in during a brief ceremony in the Freeborn County courthouse.

“It’s a great experience to have gone through the election process and to finally be here today,” Freitag said.

Freitag lives west of Albert Lea and has 21 years of law enforcement experience — 19 of which are with the Freeborn County Sheriff’s Office.